Today I took my kayak out to , located between Hurley and Viborg just off of SD Highway 19 and about 45 miles from my eastside home. is about the same size as , but the development is much less intense. The state has provided an access point along the southern shore of the lake, but this is a "bare bones" launching ramp. There is no restroom located at this point and parking is quite limited. Still, I arrived at mid-morning, mid-week, and there were no other cars or boats in the area. The ramp is located among a set of lake properties that have been build along this shore. 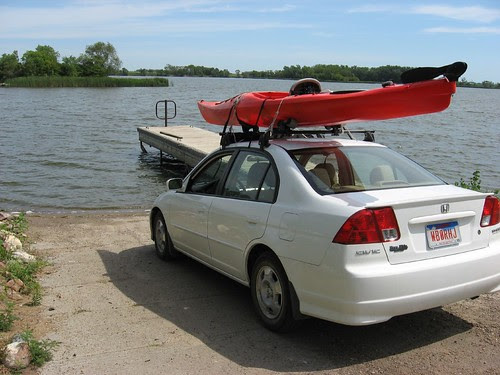 The lake itself is oriented generally east and west. Development is located in scattered parts of the eastern part of the lake on both the south and north shores. The lake homes seem more modest than those at , and I would guess that there is a "lake community" of summer residents living there. The far eastern shore has a stand of trees and there is tall grass growing up along the shore line. I saw a muskrat swimming through the lake grasses. Two wooded islands are located in the wide part of the lake, the eastern half. 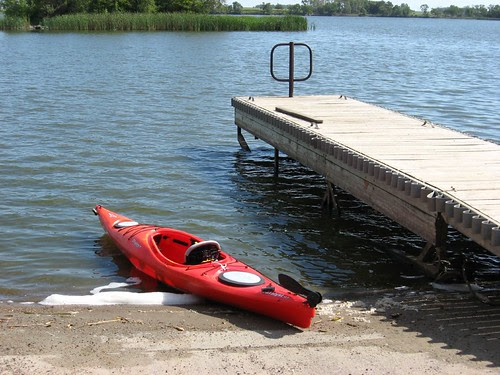 While I was paddling, there was a power boat out on the lake towing a big tube with riders. This was the only boat I saw on the lake, but many were on ramps beside lake cabins. Power boats are restricted to the eastern “main” portion of the lake. The western side is posted for “No Motorboats.” This western side opens up from a narrow strait and extends back into an area surrounded by tall grass. This grass creates a nice lee from the winds, and it is the sort of place where some wildlife might be seen. On this trip, I saw only a single great blue heron in this portion of the lake. Paddling the perimeter of the lake takes about an hour. 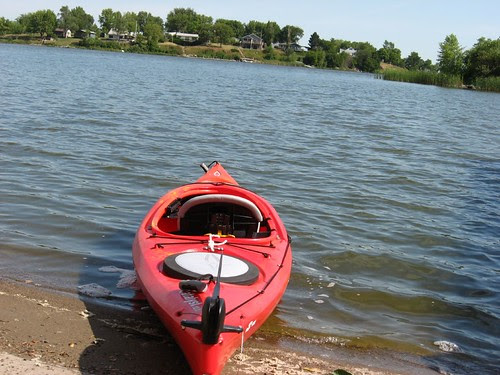 Generally, I thought that the lake offers a pleasant cruise around the perimeter. It is always enjoyable to cruise around islands, and there is still a good portion of the lake shore that is not occupied with cabins. On an earlier trip to this lake, I observed more waterfowl, but this time there was only that single great blue heron. So, would not seem among the most interesting for observing wildlife. The lake was surprisingly clear with virtually no algae growth. Going to is an opportunity to see another nearby summer lake community, a good location for a good one-hour tranquil paddle. A big downside for many would be the lack of a restroom at the launching area. Driving an hour from , a good paddle, and the ride back to can put something of a strain on the capacity of nearly anyone.

Wall Lake is located just west of Sioux Falls and is a heavily used area waterway. There is a good deal of development along much of the shoreline with lake homes that range from cottages to what seem like mansions to me. The lake is about twice the area of Lake Alvin, but it is pretty much an oval shape, which makes it look smaller. Minnehaha County has a park along the southern end of the lake with a swimming beach, shelter, and lots of picnic tables. The Girl Scouts have their area camp located just to the east of the park, still on county owned land. The state owned boat launching area is along the southwestern end of the lake, and this area is well developed and maintained. There are double launching ramps provided along with a dock and restroom facilities. 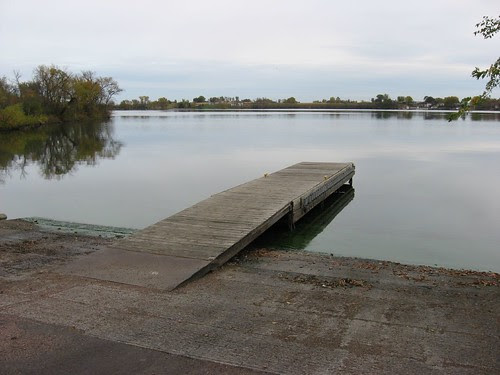 There is an undeveloped area of the lake along the west side, and scattered undeveloped spots along other parts. From the launching point, it took me only about an hour to kayak around the entire perimeter of the lake, including a narrow arm of the lake extending from the western shore in about a quarter of a mile.

As you approach the launching point, a clue to the nature of the lake is prominently posted by the dock in the form of a sign advising boat traffic to proceed in a counter clockwise direction. I saw this sign elsewhere on the lake as well. The need for a defined traffic pattern for a lake is a telling point regarding boat use. Since I arrived on a mid-week morning, I did not feel the need to adhere to that rotation: I took the clockwise route. There were only three other boats active on the lake during my cruise, but one of them was a ski boat that passed me three times with a resulting wake to navigate. I think that a wise kayaker will keep to the perimeter of the lake rather than risk a crossing in the middle; there are just too many possibilities of being either run down or caught up in a serious wake from ski boats. As I kayaked around the shoreline, I saw a great variety of boats, ranging from canoes to motorboats with powerful outboard motors. These motor boats can only zoom up and down this pretty small lake, so it is best to keep out of their way. 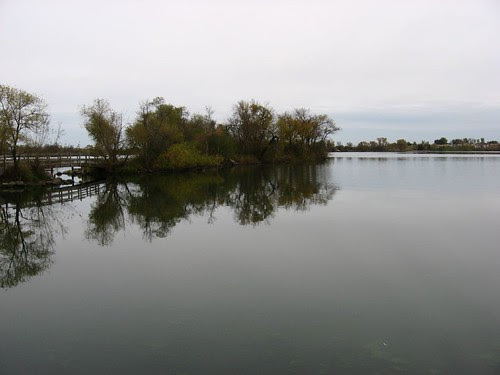 As I moved along the shoreline, I felt a bit like I was slumming, taking in the lifestyle of lake people. People who I came across didn’t seem especially friendly. I could pass within feet of people working in their yard or boat and not receive even a nod of acknowledgement. I felt like kind of an intruder upon the tranquility that these people must crave in their lake life style.

The attraction of Wall Lake for the kayaker, it seems to me, is primarily location; it is quite close to Sioux Falls. From my east side home, it was less than 20 miles, and much of that was just driving west along 57th Street. The waters are sheltered, and the Minnehaha County park is nice – or it was at mid-week with a deserted beach and no one around other than park employees. So, it is an easy body of water to access, and it is interesting to see the variety of lake properties enjoyed by people who have the opportunity to live that life style. It is also a suitable body of water for just paddling for technique or for exercise.

There are a number of features that do not place Wall Lake high on my list of area lakes. First, the high level of development seems to work in opposition to opportunities to observe wildlife. I did see a muskrat, but there were no waterfowl in sight during my cruise: no ducks, no geese, no egrets, and no great blue heron. There are lots of power boats using the lake, and this takes away from a tranquil paddle. The counter clockwise suggested rotation of boats just presents a negative notion to me. The lake is generally just a big oval which does not present a very interesting landform. 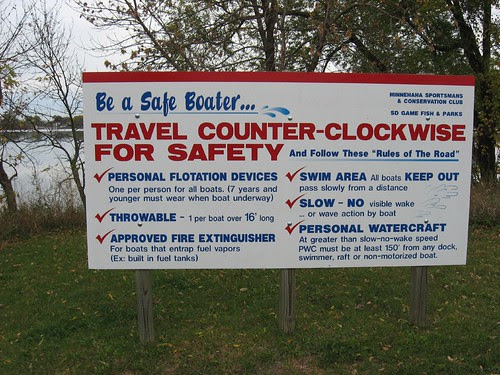 My recommendation is to restrict a visit to Wall Lake to mid-week mornings. I would think that weekends, holidays, and afternoons would be unattractive times for kayaking on this lake. Lake Alvin offers a better body of water for the kayaker who is interested in a location close to Sioux Falls.
Posted by Jay Heath at 3:27 PM No comments: