Slow Advance of Spring this Year 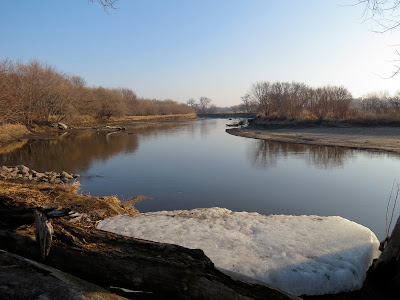 Continuing an effort to monitor the slow advance of spring this year, Dave Finck and I returned to the three sites we have been visiting over the past weeks: Grandview Bridge over the Big Sioux River, Lake Alvin, and the Klondike Rapids. 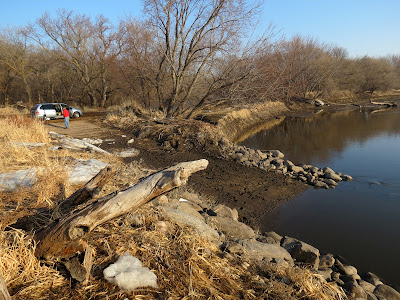 The public access area just upstream of the Grandview Bridge over the Big Sioux River is about the same as the last visit, just a little less muddy.  We were able to drive down to the public access area on the South Dakota side without fear of being mired down in the mud.  From this vantage point, it seems as though passage on the river is possible.  Banks are very muddy, however, and a major problem would be access; of course, the water is also quite cold, and a spill could be dangerous. 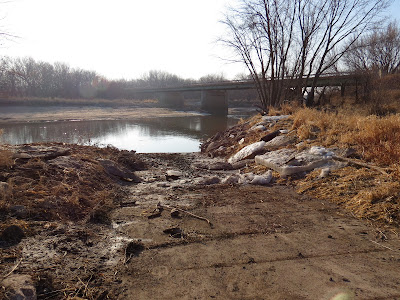 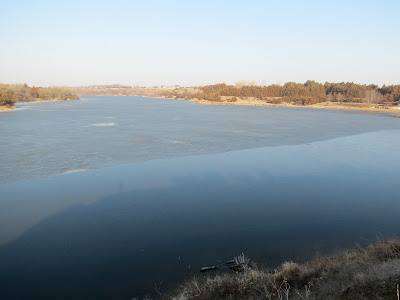 The thaw at Lake Alvin went into a stall over the last couple of weeks.  Warmer weather, though, seems to be making a difference now.  There are longer ice-free leads and generally several feet along the edge that are open.  The whole ice field looks ready to dissolve. 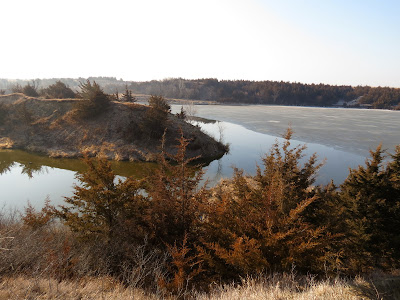 I would think that the next few days will make quite a difference, especially the coming nights where the temperature remains above freezing.  I am hoping that it will be possible to kayak the lake within a couple of weeks. 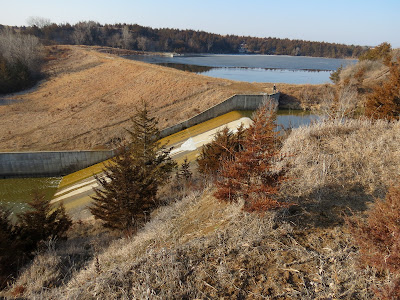 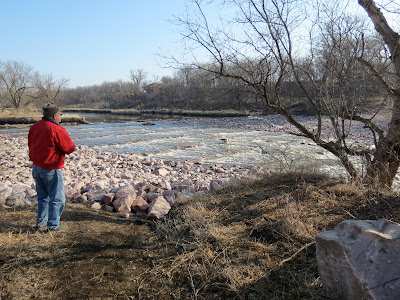 Not much has changed at Klondike over the last two weeks.  There are fewer large thick ice chunks along the shore.  It is also to see that passage through this set of constructed rapids will not be easy.  Today, we could not envision a route for a kayak or canoe through the rocks.  We discussed the danger of tipping over and getting a foot caught in the loose rock placed in the stream. 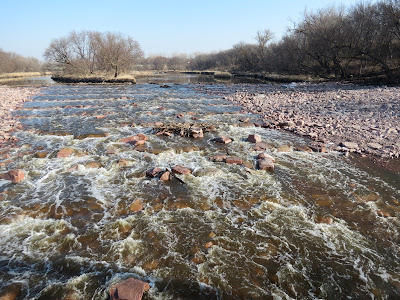 We understand that a portage trail will be constructed, but there is no evidence so far of such a path.  While it is good to see the end of a low-head dam, there does not seem to be any improvement for river travel on this section of the Big Sioux. 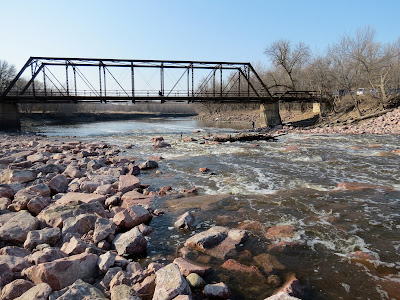 Maybe there will be something happening in the next few weeks; until then, though, passage through the rapids looks unlikely and a portage around the rapids seems difficult, especially trying to climb over the rocks. 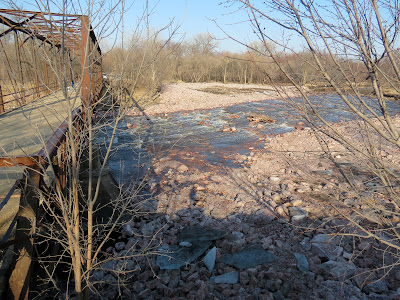 But, all in all, the winter seems to be passing now, and it is only a matter of a couple of weeks until kayaking/canoeing will be resumed. For those considering an early cruise, I do want to strongly remind readers about the very cold water temperatures and the risk associated with early paddling.  Take care if you go out on the water over the next few weeks!  As for me, I will be getting out my paddles and other kayaking equipment from the garage attic, checking out my kayak, and attaching the roof rack to the Honda Civic.  I want to be ready for a first cruise as the moment arrives. 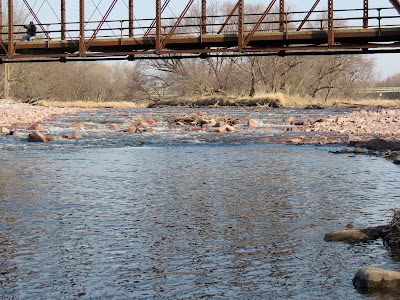 Two Weeks Ago in Costa Rica 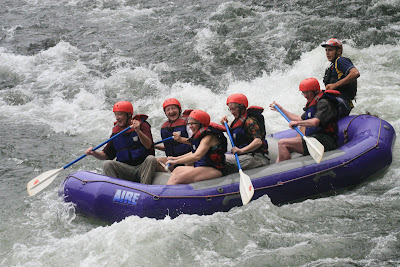 With the slowly approaching paddling season here on the northern plains, I can't help but think of our recent two week trip to Costa Rica, especially my first time rafting through class 3 rapids.  I looked at the rushing water over rocks in the Sarapiqui River and knew that I would never have even thought of going through with a kayak.  Still, there were two guide/rescue kayaks (a short whitewater boat and an inflatable kayak) as part of our group of four rafts going on the two-hour cruise. As you look at the photograph of us, I am in the bow on the right side, and my wife, Marcella, is right behind me.  She can't swim and I can't get her into a kayak; still, she had confidence in the guides and loved the ride.  She was sorry to see the trip end. I began thinking that maybe I would have to add a tandem boat to my fleet for future cruises, but she does not seem too eager.  Maybe, with reason, she had more confidence in the whitewater rafting guides than in my skill level!
Posted by Jay Heath at 12:06 PM No comments:

Since we are almost halfway through March and the paddling season is nearly upon us, Dave Finck and I headed south on Highway 11 out of Sioux Falls this morning to check out some of the area waterways.

Our first stop was at the Grandview put-in, along the highway south that passes Lake Alvin.  The Grandview road is 272nd Street, just north of the Lake Alvin turn-off and crosses the Big Sioux River.  The State of South Dakota maintains a boat access point just above the bridge.  Viewed both up and down stream, the Big Sioux is open, with large chunks of ice, some up to 1 ½ feet thick, scattered along the shoreline.  The water, of course, is ice cold.
Next, we stopped by Lake Alvin to see how the melt was progressing.  Water is flowing over the spillway, and the channel leading from the main body of the lake up to the spillway is open.  There is an open lead along the shore that extends out, but the main body of the lake is still ice covered.  It seems as though the ice can only last a short time now.  Last year at this time, I had already taken my first cruise on Lake Alvin.  So, I would think, the remaining ice will surely disappear within the next week or so.
Then we drove down to the Klondike Dam site to check how the removal process has progressed.  The major part of the dam removal work has been accomplished.  The equipment has disappeared from the scene, and the water is flowing through the rapids. The ice is mostly gone from the stream, although very large chunks of ice have moved downstream and are scattered along the banks.
The water is moving fast through the slot created for the rapids.  We were able to talk at some length with one of the Lyon County (Iowa) conservation officers.  He told us that some of the large boulders in the stream have shifted and created more rapids than planned.  These large rocks will be repositioned soon.  The rural water supply people use water from the Big Sioux that is captured just above the bridge, where the old dam was situated.
Because of the need to maintain a rural water supply, the project developers needed to maintain a pool of deeper water above the dam to ensure adequate flow for their purposes.  This is, apparently, the rationale for creating a set of rapids that inhibits the water flow.  Another benefit of the work, obviously, is the removal of a potentially dangerous low-head dam across the Big Sioux River.

The conservation officer told us that South Dakota planned another boat launch ramp above the rapids.  On the Iowa side, more development is anticipated with an access point for the river and, over the long haul, cabins and camping facilities on that side of the river, both above and below the bridge.

At this point, a run through the rapids does not look very appealing to me.  I hope that a portage trail is developed soon so that longer cruises through this portion of the river will be feasible.  The rapids are certainly better than the low-head dam, but I just don’t feel a sense of ease in thinking about shooting through those rocks in the in the middle of the current flow.
Finally, I returned to the river bank an hour or so later with one of my sons and my wife for a hike
through the Gitchie Manitou State Preserve on the Iowa side of the Big Sioux River.  The water seemed totally free of ice at that point with a smooth flow downstream.  Geese were settling in along the river, perhaps beginning the nesting season.
So, the great meltdown is underway.  Very soon, this narrative will capture images and description of conditions on area waterways as our much anticipated spring begins.
Posted by Jay Heath at 1:26 PM 1 comment: