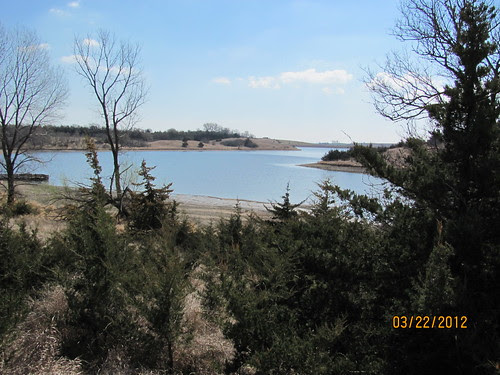 Taking advantage of a great paddling forecast, I decided this morning to head out to Lake Lakota for a cruise around this scenic setting and to check out the advancing spring. Lake Lakota is a part of the Newton Hills State Park and is less than 30 miles from my eastside Sioux Falls home. I left town about 10:00 a.m. into the lingering traces of a widespread fog that blanketed the area, a temperature of about 50 degrees, and very light winds. I was looking forward to cruising around the perimeter of the lake and finding glimpses of waterfowl and perhaps other critters out and about. 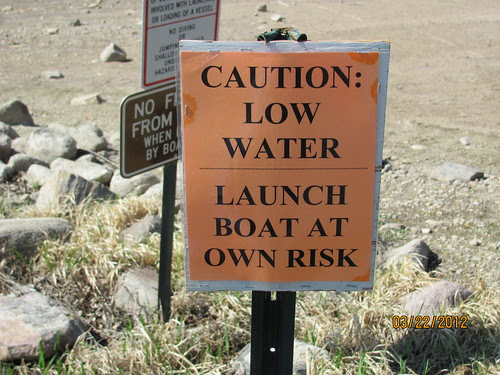 When I arrived, I was astonished to find that the lake was in a state of serious contraction due to exceptionally dry conditions this winter and spring. The shoreline had retreated about 25 feet or so all around the lake along with a drop of about 5-7 feet in water depth. A mud flat extended from the water’s edge to the shoreline. The water depth in the remainder of the lake varied from a few inches to well over the length of my double-blade paddle. 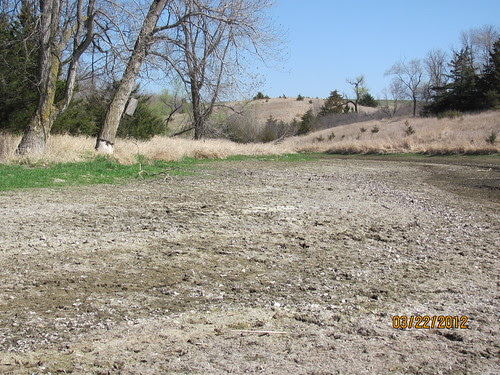 I cruised around the perimeter of the lake, but the several inlets extending from the surrounding watershed had largely dried up. Still, I was able to travel up to the dam and then back and up into the western arm, although that arm slowly diminished in depth until the final 50 yards or so were first marshy and then dry. At the end of the arm, I found myself drifting along in water only a few inches in depth until further forward progress was impossible. 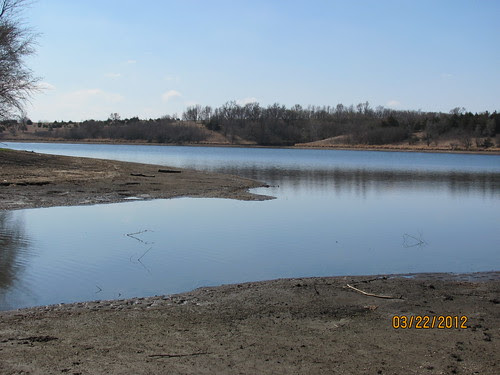 There was little wildlife visible today. Since there was little wind, the sound of bird life among the shoreline trees was constant and there were a few ducks on the water. Unlike last spring, no pelicans were visiting today. I did see turtle heads peeking up from time to time and even saw a couple of them below the surface in the very shallow waters of the western arm. 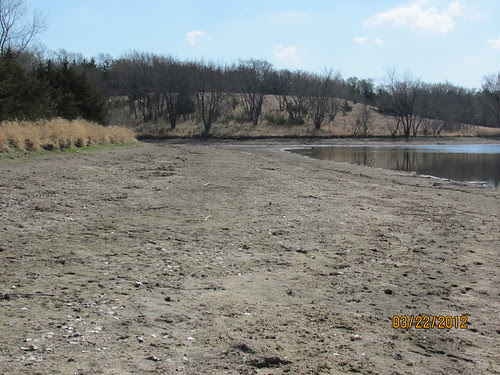 There was one guy out fishing from the shore. We spoke briefly, and he told me that he had not seen Lake Lakota this dry in 25 years. Still, he said, “however it goes, it is a beautiful day.” It was a nice sentiment and left me smiling. 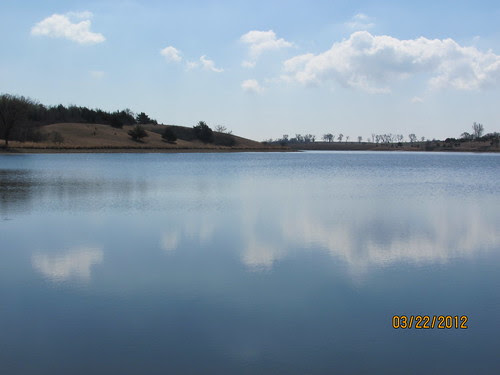 It is not likely that people would be able to easily use a fishing boat under the current conditions. The dock has not been put in and the concrete boat ramp ends just before the water. So, I would guess that it would not be very easy to launch a boat from a trailer. 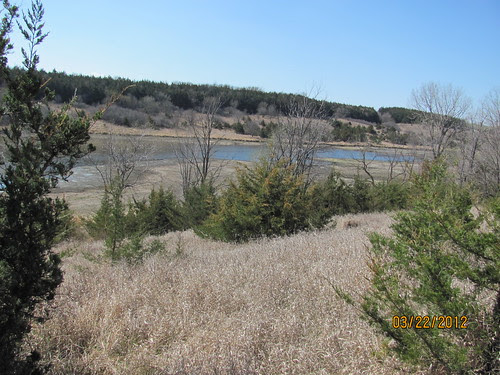 I think that the condition of Lake Lakota is such that it cannot be recommended as a paddling site for now. Perhaps we will have big spring rains and the lake will fill up again. I certainly hope that takes place. For a look at Lake Lakota under better conditions, check out the many narratives found under the area waterways inventory on the right side of the blog. 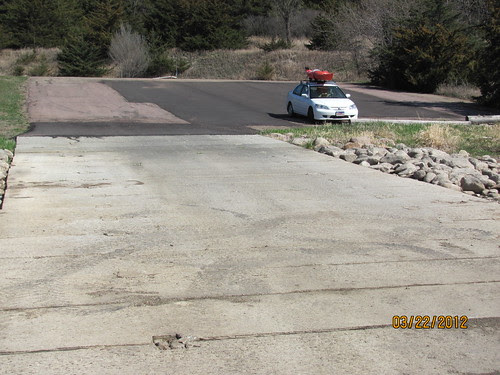 A word about the photos: My usual camera has developed a defect, and I borrowed my wife’s camera. Somehow, the date stamp was activated, and in the process of trying to turn that feature off, I lost all the photos that I took from my kayak. When I noticed that the photos had disappeared, I took another batch from the shore after returning. I was not able to get the date stamp removed until I got home and fiddled with the camera. The date stamped on the photos is also a day off. Irritating! 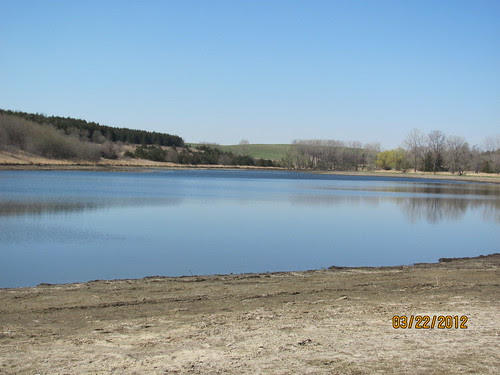 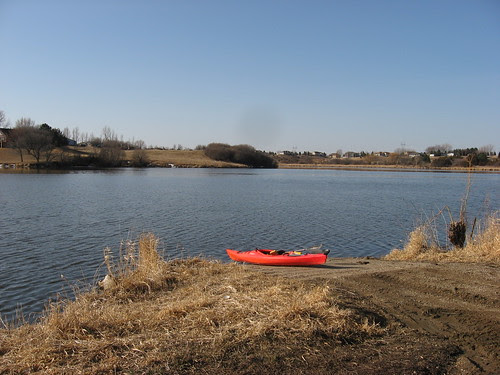 This has been an exceptionally mild winter on the northern plains. Only a few inches of snow have fallen in the Sioux Falls area, and that has almost all disappeared. Only a few scattered piles of snow remain in shaded areas. Last week, my wife and I walked through the Big Sioux Recreation Area and saw, on two occasions, kayaks slowly moving downstream on the Big Sioux River. We all get anxious to take advantage of these glorious days in early spring. 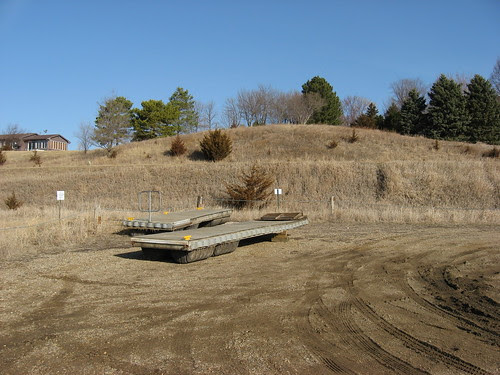 In anticipation of the wonderful forecast for this week, I decided to go out to Lake Alvin to see if there was any ice remaining on the surface. This morning I loaded up my kayak and arrived at the public access area on the southwestern end of the lake. The lake was open, with only a hint of possible ice over on the southeastern shoreline. The temperature was in the 40s with a predicted high of about 75 degrees later in the afternoon. The dock had not been set up yet in either the recreation area or at the public access point. As usual, the lake was deserted on this weekday morning. 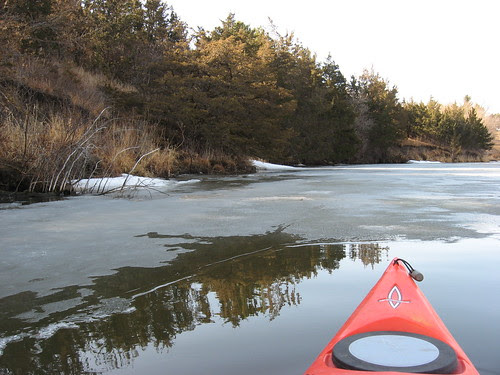 I headed across the lake to the southeastern side and found ice extending out a few feet from the shore at isolated spots. This is a side of the lake that receives less direct sunlight at this time of year; even there, however, the remaining ice is likely to fade within days. 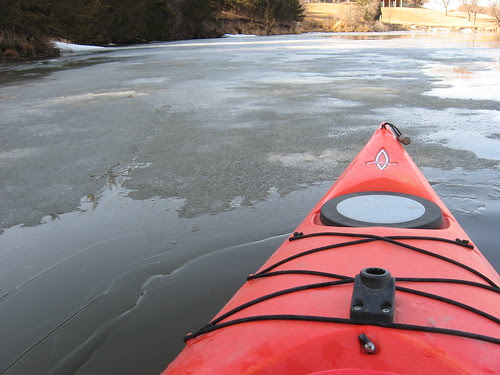 Following my usual course, I headed up into Nine Mile Creek and continued for a half-mile or so, maybe longer. Water depth was sufficient to make passage easy, all the way up to my normal ending point. 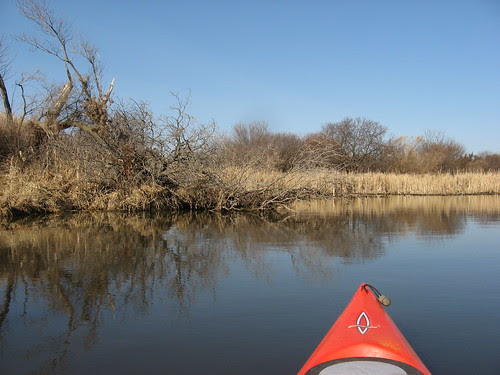 The grasses are still in winter brown and there is little hint of the approaching growing season. I find a sense of beauty in these dried shoreline grasses and bare trees and bushes. As the days and weeks pass, there will be rapid changes in color for this vegetation, and it will all look increasingly attractive. There is hope and optimism in this cycle, unlike the sense of foreboding suggested by the same colors in the late fall. 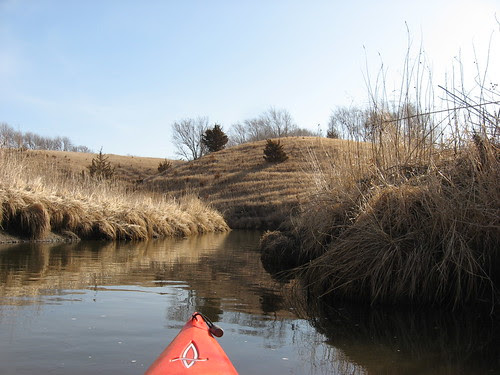 Nine Mile Creek is fun to negotiate and adds some charm to the lake paddle that would be missed with a straight shot down the main body of the lake.

There were several pairs of ducks out today and lots of carp visible up in the creek. I also saw one large great blue heron. While there were lots of perching birds about, I did not see any geese today. On the way back up the lake after my creek paddle, I watched the contrails of jet planes passing overhead heading both east and west. Again, I thought of those passengers who might chance to look out the window at the passing “fly-over” states, perhaps wondering about who might be below looking up at the plane. There must have been six or more flights passing overhead during my paddle time. 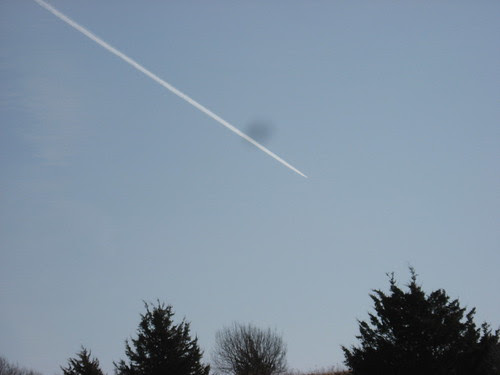 I continued up the main body of the lake, heading north to the launching ramp in the recreation area. A wind had picked up during my route north creating a following sea condition. Knowing that I would be facing a head wind on the return, I turned just after the northern ramp and returned into a developing chop along the western shoreline. 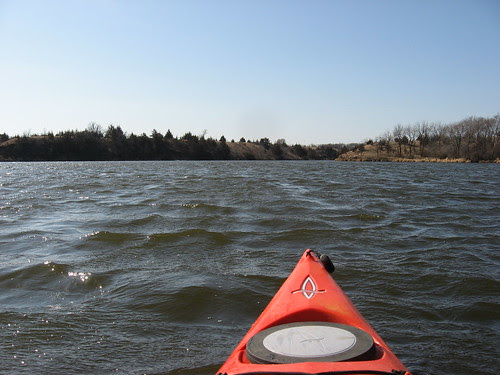 As I approached the public access ramp, I noticed the first sign of life – a van parked near the take-out. As I got closer, Dave Finck stepped out of the van with a big smile. He had spotted me from an elevation further north and came down to say hello. He pulled my kayak up and saved me from getting my feet wet. Then, he helped me load up the kayak on my car. It was good to see Dave, and I appreciated his help. 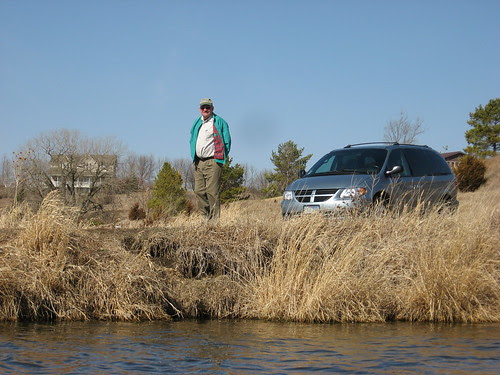 The cruise today was about two weeks earlier than normal. I can’t remember being out on a lake this early in the year. The season ahead looks great, and I will be visiting all my favorite lakes and streams earlier than ever. 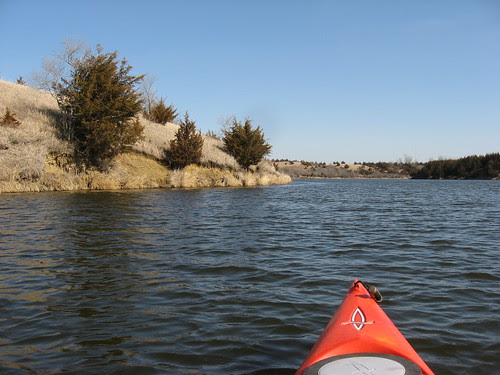 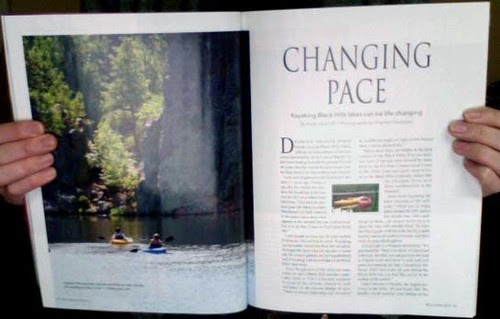 South Dakota Magazine has a great story this month that presents the life-changing effect of kayaking upon a man in the Black Hills who has been fighting Parkinson’s disease. This story should resonate with readers of this blog on multiple fronts. First, kayaking is presented as a physical activity that can be continued, even with some physical limitations, over a lifetime. There is inspiration in the way Kelly Lane, of Rapid City, is committed to kayaking and indeed credits it with helping him maintain an active life. Then, there is a description of kayaking the many lakes in the Black Hills and finding contemplative joy in being alone on the water.

As I read this piece, I was reminded of my own motivation for kayaking and was struck with the similarity of purpose presented by Kelly Lane. I find the same satisfaction in kayaking the isolated prairie lakes in the Sioux Falls area as he does in similar but more scenic lakes in the Black Hills. Reading this article makes me want to explore the 33 lakes found in the Black Hills. It also offers some assurance that kayaking is not just for dare-devil white-water paddlers; kayaking is an activity that can be meaningful on several levels, and I feel encouraged to continue on with my paddling, even as a retired 70-year old geezer.

I strongly recommend this piece in the March/April issue of South Dakota Magazine.
Posted by Jay Heath at 1:51 PM 1 comment: