I have not cruised on Lake Alvin since last November. The spring has been delayed for about a month this year, and people are just now getting out on the area waterways.  This morning I decided to take advantage of the best forecast of the upcoming week and drive out to Lake Alvin.  The lake is just 15 minutes from my eastside Sioux Falls home, and I waited today until about 9:00 a.m. to leave.  The temperature was in the 60s, it was sunny, and a moderate wind was coming down the lake from the north.  As is often the case, I was the only person on or around the lake.  A guy showed up just as I was leaving with a couple of dogs that were anxious for me to leave the area so that they could run into the lake. 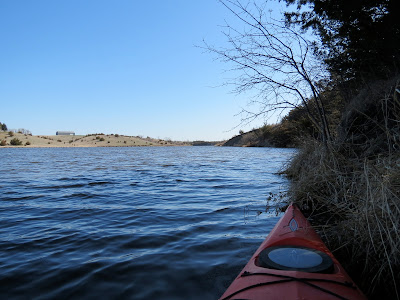 The dock is not yet installed for the public access area along the southwestern side, although it is in at the recreation area launching site.  I departed from the public access area and paddled across to the east side and then headed south toward Nine-Mile Creek.
There is plenty of water in the lake, unlike my trip to Mud Lake last Friday.  The water level in Lake Alvin seems pretty normal to me. 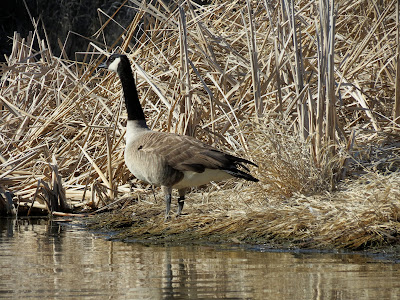 Going a mile or so up Nine-Mile Creek is my favorite way to begin a cruise on Lake Alvin.  The creek flows into the lake from the south.  Moving down the lake and up into the creek requires that a kayak hug the eastern (life side going up into the creek) shore in order to escape shoal water in the southern end of the lake. 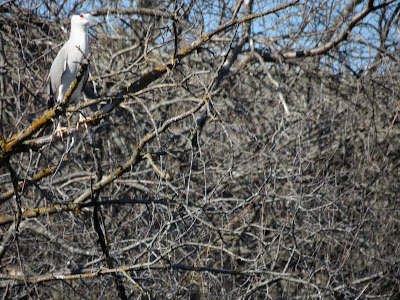 Nine-Mile Creek is about 50 feet wide as it enters Lake Alvin, but it gradually narrows down on the journey south until it is perhaps 10 feet wide and too shallow for even a kayak.  A trip up the creek takes about 20 minutes going upstream and then about 15 minutes for the float back.  The creek had adequate depth all the way; I even used my rudder most of the time. 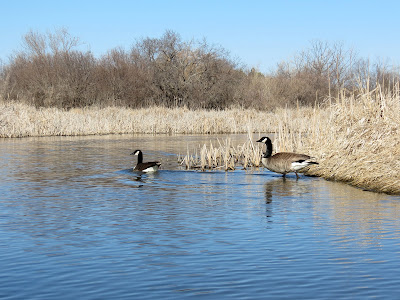 There were lots of birds out today, especially waterfowl.  Geese and ducks seemed to be nesting along the shore and in the marsh and growth just into the shoreline. I saw a couple variety of ducks, lots of geese, a coupe of egrets, and lots of perching birds. I did not see any mammal life today, although there were some turtles just easing out into the morning sun.  I have heard that turtles have poor eyesight, but they seem to see my kayak approaching from 30 feet away. I no more than glimpsed them before they would slide off their resting spot and into the water. 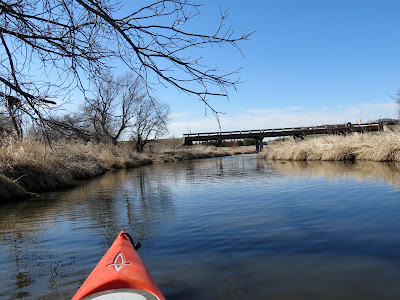 After exiting Nine-Mile Creek, I proceeded north along the eastern shore of the main body of the lake until I was opposite the recreation area dock on the northwestern side.  From there, I crossed over to the western side and continued back to the public access launching area. 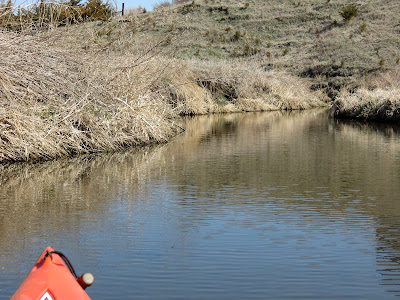 Paddling in a deep body of water was just the opposite of the Mud Lake cruise on Friday.  It was pleasant to cruise along, especially in Nine-Mile Creek, and hear only the sounds of bird life and watch the green shoots of grass poking through the brown winter cover.  The cruise today was just under two hours. 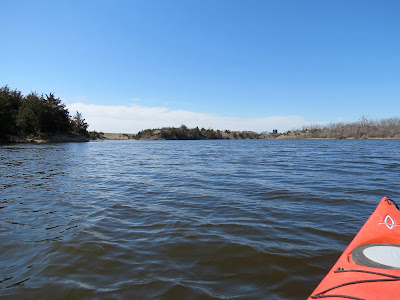 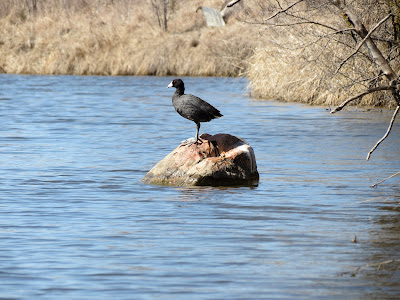 Mud Lake - At Last, a First Cruise of the Season


At last spring seems to have come to the Northern Plains, at least in the Sioux Falls area.  Just a few days ago snow covered the landscape and the notion of approaching spring seemed elusive.  It seemed like we were in an endless winter.
Today, however, the temperature was forecast to rise to the high 60s or even 70 degrees.  This is the warmest day since last fall, and people are walking around in shirtsleeves and heading outside.  This was the first reasonable day for an initial canoe/kayak cruise of the season, although some hardy people have ventured out a little earlier.
Dave Finck and I decided to explore Mud Lake, a little known body of water located in Turner County, just a few miles northeast of Hurley, SD.  We took one of Dave’s Wenonah 17-foot Kevlar canoes atop his van and drove south on Interstate 29 out of Sioux Falls to Highway 44 and then west to the highway that continues south out of Chancellor to Hurley.  There is a public access point on the east side of Mud Lake, along 458th Avenue.
The public access point on the east side of the lake is also known as the Shaeffer Game Production Area.  There is a parking area and a very primitive boat launch, although the lake has receded so much over this drought that it would not be feasible to launch a boat from that point.  In fact, it is difficult enough to launch a canoe through the shallow water and mud.
We shoved off into the lake from this public access area, but it was difficult to make our way through the mud and water that was only a few inches deep, even out several feet from the receded shoreline.
We scrapped along through the shallow water until we got a foot or more of depth and then headed south along the eastern shoreline.  We saw large segments of the normal lake bed where the only sign of water was extended mud flats.  The lake is down at least two feet, maybe more.  The exposed shoreline is up to 20 feet from the existing surface of the lake.
Still, we made it around the northern end and then along the western side heading south.  There are large sections that include bays and channels into the marshland that are dry now.  The lake is described as being about 180 surface acres, nearly twice the size of Lake Alvin, but the reduced body is perhaps half of what it might be in times of normal moisture.
Mud Lake seems like a wonderful environment for birding.  Today, we saw a large flock of pelicans, many geese and ducks, lots of shore birds, hawks, and perching birds. There are large trees along parts of the shoreline and many nesting areas among reeds.

Moving down into the southern portion of the lake, we found more depth to the water.  Still, depth ranged from only a few inches along some parts of the lake to perhaps a little less than three feet in other spots. We sometimes glided into water too shallow to float the canoe and had to pole our way out.  The mud was deep enough to sink the paddle for 18 inches or so in most spots.  The bottom seemed to be mud throughout, and thus, I suppose, the name of the lake!
It took about 45 minutes to slowly make our way around the perimeter of the lake.  We decided to come ashore in a place that seemed a bit more solid; still, I sunk into the mud for 8-9 inches just getting up onto the beach.
Because of the receding lake surface, there is a beach about 20 feet wide extending down the shoreline.  This beach varies from sand to stones to packed and dried vegetation on top of the dried mud.  We walked half a mile or so down the shoreline to soak in some sunshine and watch the bird life out on the water.
Mud Lake would be a very nice cruise if the water rose a couple of feet.  The area is isolated, hard to find, and rich in birdlife.  The SDGFP area on the eastern side is fine for parking and then launching a canoe or kayak.  As it is, though, the water is just too shallow for a relaxing cruise.  It reminds me of a cruise we made on Silver Lake last fall.  It is interesting to me that some area bodies of water seem almost unaffected by the drought, Lake Alvin and Split Rock Creek above the Garretson City Park dam being two of them.  Others, such as Silver Lake, Lake Lakota, and Mud Lake are very negatively affected by reduced rainfall.
A complete set of the photographs taken on this cruise on Mud Lake may be accessed at the following Flicker URL:  http://www.flickr.com/photos/jayheath/sets/72157633358523880/detail/
Posted by Jay Heath at 2:42 PM No comments: