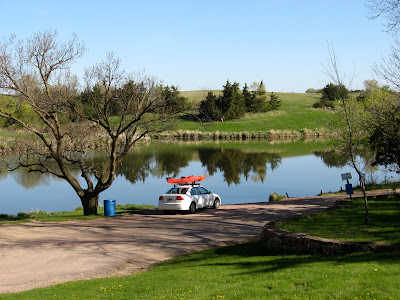 This was a wonderful day, a day to relish being retired and able to operate on my own agenda!  After my routine bagel, two cups of coffee, and a good read at my favorite morning spot, I walked back home, fed the Finnegan the dog, and took off for Garretson for a paddle through the palisades. 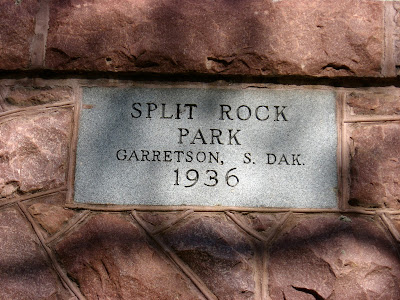 The Garretson City Park was developed in the 1930s as part of the WPA.  The project employed 47 men in the construction of a dam and the stone building that serves as the park headquarters.  The park is owned and maintained by the city and is really a fine place for a hike, camping, day use, fishing, and, of course, as a launching point for canoeing or kayaking upstream for a mile and a half or so.   This is also where the touring pontoon boat “Jesse James” departs. 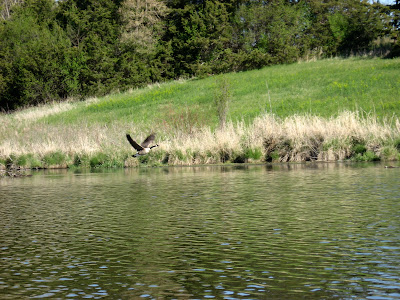 As normal, I was alone in the park and on the water.  I set out and crossed to the other side to observe some geese paddling around.  As I approached the first set of palisades, I was surprised by a large goose flying out of the cliff wall.  I could not see how the goose managed to find a spot in the cliff, but it zoomed over my kayak so close that I could hear the wind turbulence of its passage.  I suppose that I spooked the goose causing it to flee my presence.  If I had been hit by that large goose, it would almost certainly have caused a capsize. 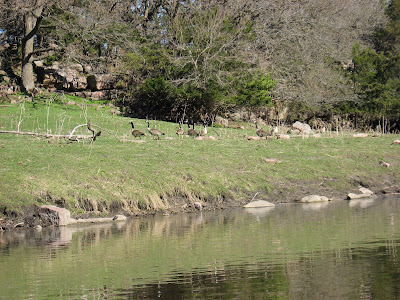 There were more geese on the water today than I have ever seen.  They were flying overhead, fleeing from the cliffs, on the water, and in gaggles in the grass along the shore.  I saw a pair waddling along through the grass with a group of goslings trailing behind. 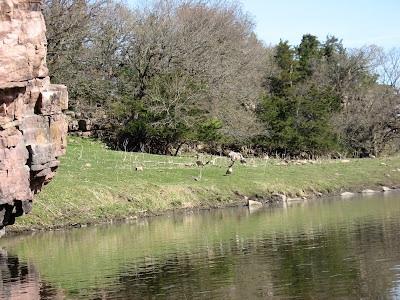 A few turtles were out sunning themselves in the 70-degree sunny and windless day. 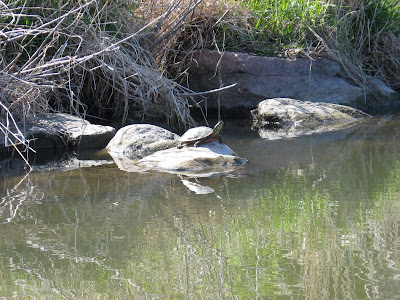 As always, though, the palisades are the dominant feature along this waterway.  I was cruising through about 9:30 a.m. so there were nice shadows cast on the water.  The spring vegetation has taken hold with a world of green emerging all over the landscape.  The green trees growing on top, in the cracks, and on ledges of the cliffs are spectacular. 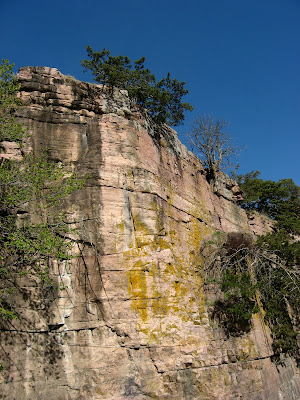 I just like to cruise alongside the cliffs and look up at the hardy plants that have taken hold on the cliff faces.  There are also lots of cave-like entrances into the cliff, although I think that they just extend a few feet.  Soon the cliff swallows will return and bring clouds of these birds around the palisades.  They live in mud waddle nests that are enclosed except for a conical entrance hole. 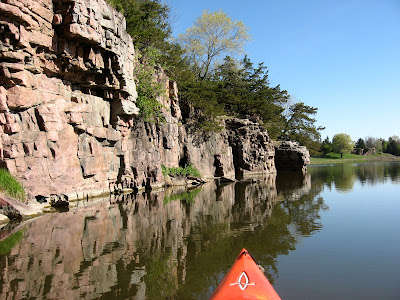 At times the palisades rise up along both sides of the waterway; and at other times, they alternate on sides of the creek. 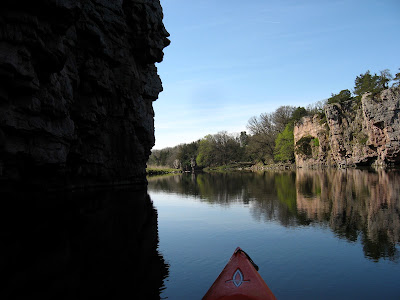 The creek can be navigated upstream for about 1.5 miles until reaching a set of rapids.  Essentially, this is where the backed up water from the dam ends, and the creek reverts back to its rocky course.  Two houses are located at this ending point on the impounded water. 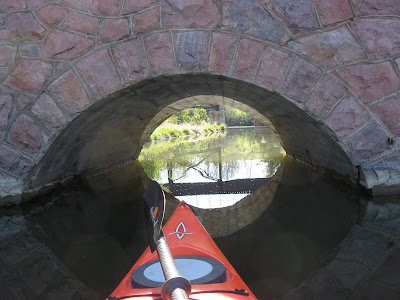 On the way back, as usual, I ducked under the stone arched bridge to cruise into Devil’s Gulch. It is possible to paddle back a few hundred yards until running out of water depth.  High palisades line the banks of the gulch, just as along the main course of the creek. A high railroad trestle runs overhead crossing the gulch. There were even geese on these waters today. 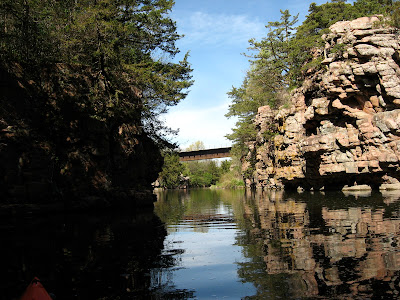 My cruise this morning took about an hour and a half.  However, I lingered along the cliff faces, looked at the geese, and just cruised along at my slow but contemplative pace. As I cruised along, I noticed the contrails of jet aircraft crossing high overhead, bound for distant places.  The reflection of their contrails traveled along with me on the return cruise. 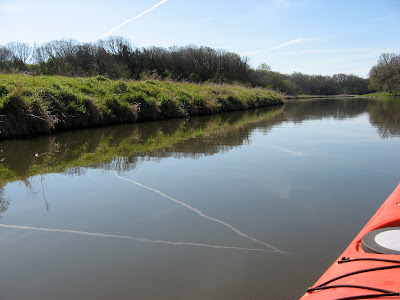 The last time I kayaked this waterway was in November on a cold moonlight cruise under the leadership of Dave Finck.  As I moved along the creek today, I thought about that cruise in the cold and dark and the challenge it represented. 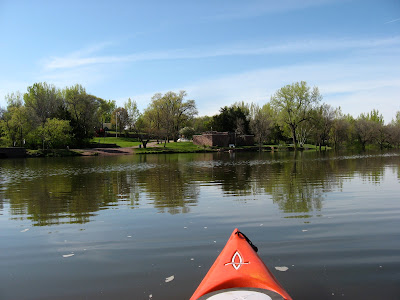 A cruise along Split Rock Creek upstream from the city park is one of my favorite outings for friends wishing to go kayaking.  I make the cruise about three times a year to enjoy the changing seasons along the shoreline. 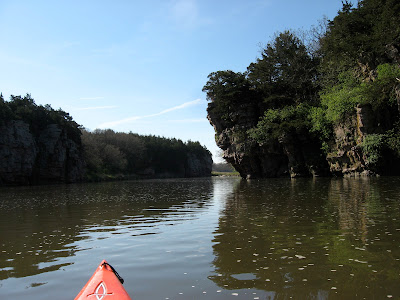 Past cruises along this waterway can be reviewed through the narratives listed under Split Rock Creek in the inventory on the right side of the blog.  A complete set of the photographs associated with this cruise can be viewed on my Flickr page at: http://www.flickr.com/photos/jayheath/sets/72157629892366503/

With record-breaking high temperatures and a forecast of sun with moderate winds, a cruise organized by Dave and Mary Finck and Larry Braaten down the Big Sioux River was irresistible. A group of SDCKA paddlers met at Lein Park in Sioux Falls for a 12 mile cruise downstream to the Big Sioux Recreation Area on the far edge of Brandon.

A shuttle was organized to move vehicles from Lein Park to the BSRA, where we left our cars and rode back in Dave Finck’s van. Interestingly, a SDGFP park ranger appeared at the parking area for the shuttle and checked all the vehicles for park stickers. There were 11 kayaks in the cruise paddled by SDCKA members, and, as it happened, another group of five kayaks put in at the same time and were with us some of the time along the cruise.

The put-in at Lein Park is about 100 yards or so from the parking area, and Dave Finck organized a carrying-chain of people to move the boats. Each person had one end of their own kayak and one end of another. I found myself gabbing and missed the chance to share the pain in that sort of carry; fortunately, I had my canoe/kayak wheels with me, and it was a simple operation to strap on the wheels and stroll along to the steep bank for the drop into the stream.

We set out on the stream about 1:45 p.m. and proceeded downstream. This section of the river runs through a relatively flat landscape. The river rolls along between banks of about 5-6 feet in height. There is a variety of bank along the route, some steep and others shelving onto a gravel and mud beach.

There were a number of old strainers in the water, large trees that had fallen so that they partially blocked the flow. Almost all of these strainers were easily avoided. The river flowed at a good speed, and there was enough depth throughout the course so that grounding was easily avoided. When a kayak did go aground, it was generally easy to ease out into the main channel. The river depth ranged from shallow spots of about 18 inches to perhaps five feet in the mail channel.

During the first eight miles of this segment, the river flows mostly east and parallels Rice Street. The old nuclear power plant is a landmark that I always notice.

Great Bear Recreation Park is easily visible off to the right, and I found myself looking up at the hills where I like to roam during the summer. Interstate 90 can be glimpsed at times off to the left.

We came across one strainer that stretched across almost all the stream. There was a four-foot gap through the branches, and most of the kayaks made it through this obstacle without difficulty. One of our party, however, had a problem moving through. She had grabbed onto a branch to steady her craft through the passage, but she held on too long and the kayak overturned, spilling her into the river. The current carried her across the river to the far bank with her holding onto her boat. Fortunately, a number of the group assisted her in getting pumped out and reentering the boat.

My kayak was the last in line to pass through the strainer, and the paddler in front of me suddenly decided to head to the shore and portage around the strainer. This seemed like a good idea to me, and I followed suit.

There is never much wildlife seen on these river cruises. We did pass a gigantic eagle’s nest in a big cottonwood tree along the left bank, and there in a high tree along the right bank was an eagle watching the flotilla pass.

As we approached Brandon, the river took a bend to the south and we found ourselves paddling into the teeth of a moderate headwind. The smooth route east provided shelter from the wind, and this new direction south markedly increased our paddling effort.

As we moved past Rice Street at the edge of Brandon, we passed an increasing number of people out along the shoreline enjoying the wonderful 90-degree sunny day. People were fishing and playing in the shallow waters. A number of people had dogs with them, dogs running after balls thrown into the water.

This was a tiring trip for me and for many others of our group. It was an early kayaking trip for most of us, the temperature was record-breaking, and we were paddling against a stiff wind for the last few miles. I was eager to reach the Big Sioux Recreation Area and found myself looking around each bend for the suspension bridge crossing over to the Prairie Vista trail near the archery range of the BSRA.

We arrived at the take-out and rather quickly loaded up our kayaks and departed the area. Beforehand, however, one of our group passed around a pan of delicious fudge style brownies, and I had to restrain myself for asking for a second.

With the marvel of electronic gadgetry, I was informed that the trip was just short of 12 miles and that we had spent three hours paddling with another 45 minutes in stops along the way.