Dave Finck picked me up this morning for another progress review of the Klondike dam removal on the Big Sioux River.  Over the past two weeks, work has continued on reshaping the course of the river south of the island that divides it just before the bridge connecting the South Dakota and Iowa banks.
There were two pieces of heavy equipment being used this morning and regular stops by side-dump trucks filled with large chunks of quartzite rock. Much more rock has been delivered to the site since our last visit.
A set of eight steps has been created so far in the river bottom through the passage leading up to the bridge and over where the dam once stood. The steps are formed from large quartzite boulders and filled with smaller rock.
Neither Dave nor I were able to envision how boats would pass through this staircase of rocky steps.  There is a vast bed of quartzite rock that now extends across the entire riverbed, including the old ramp on the Iowa side leading down to the river.   It is certainly the opposite of a sandy bottom leading up to a “put-in” providing easy access or egress from the river.
There is, as yet, no sign of an easy portage around the rapids being created in the place of the old Klondike dam. But, perhaps one will emerge as the project continues. A couple of visits ago, the project manager told me that the portage will be on the SD side but was not part of this engineering phase.   In any event, there are public access areas on both sides of the river connected by the old bridge.  The bridge is barricaded to prevent vehicle traffic and is open only for pedestrian use.
We have been out to observe progress on the project three times, and each time seems to be during an especially cold and windy day.  While the temperature today was in the 20s, there was a stiff wind blowing that quickly chilled me as well as my camera, just as it has each time we visited the site.
Klondike was a thriving small Iowa town a generation ago, but it is now only a few scattered homes on both sides of a gravel road leading up to the bridge.
While the river is still frozen over south of the Klondike Bridge, we passed an open stretch on the way back through Brandon.
Posted by Jay Heath at 9:44 AM No comments: 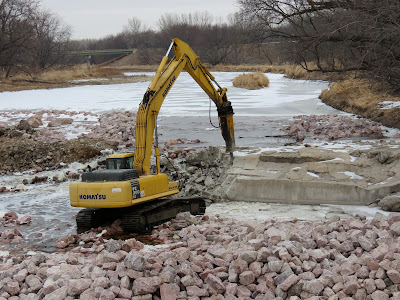 Removal of the Klondike Dam on the Big Sioux River is continuing apace, and there is marked progress since my observation last month. 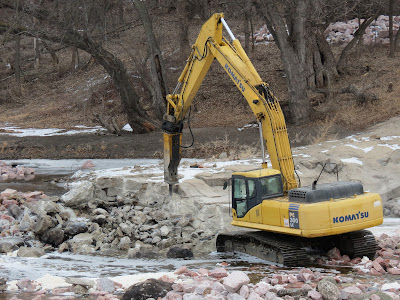 This morning, Dave Finck met me for coffee and drove us out to the Klondike site to observe any change since our last trip.   It was a cold morning under overcast skies, and we arrived at the construction site on the South Dakota side of the Big Sioux River about 9:00 a.m. 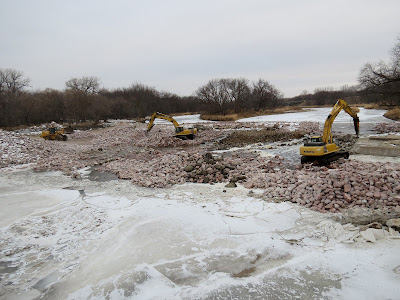 A crew of three equipment operators was at work removing the remaining portion of the low-head dam and filling in rock across the course of the river.  Already, a slot through the accumulating rock is apparent, and river is flowing through this shallow area and on downstream under the continuous ice cover to the south. 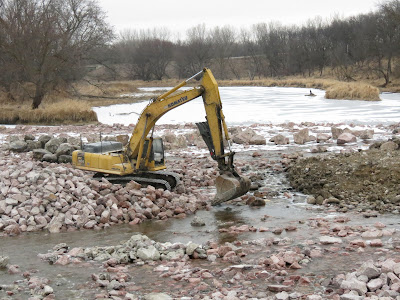 Looking at the rock fill that is being used to replace the dam and provide a deeper pool upstream, I wondered what it would be like to zip through in a kayak.  I was reminded of the rock fill that is in the Big Sioux River flowing beneath the bicycle trail bridge in Sioux Falls.  That passage is also filled with quartzite rock and creates a set of rapids.  When that section of the river is high and flowing fast, passage through the rapids seems to result in few incidents.  When it is low, however, there are enough hazards to cause me to feel a sense of anxiety when approaching that slot.  I suspect that the rapids created with the rock fill at Klondike will be somewhat similar. 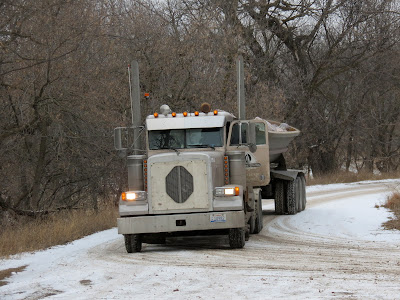