In the summer of 2006, I visited Silver Lake, just 7 miles north of Freeman, SD, with Jarett Bies, currently the president of the South Dakota Canoe/Kayak Association. I have had vague plans to revisit this body of water over the years and finally got around to it this morning.  Dave Finck, one of my kayaking pals, expressed interest in traveling to Silver Lake, and he offered to take his canoe and trailer rather than load up our kayaks.
We set out on a glorious fall day here on the northern plains; it was about 37 degrees as we left Sioux Falls for the 45 mile drive southwest to Silver Lake under sunny skies with only light wind.
The western shore of Silver Lake is alongside US Highway 81.  A rest stop with vault toilets, a picnic table, and a turning and parking gravel apron are provided at this site along on the eastern side.  It is easy to carry a canoe or kayak down from the parking area to the lakeshore.
The state provides a public access area on the eastern side of the lake.  As is common on South Dakota lakes, there is no signage to point the way, but it can be reached by turning east on 271st Street, just north of the lake, and continuing one mile to 440th Avenue and then turning south for about a mile.
This public access site, however, is a derelict set on a receding shoreline with a broken pier.  The area seems as thought it has been the location for beer parties, with broken glass and trash strewn about.  The shoreline has receded several feet, and it would be impossible to launch a boat at this point.
Launching a canoe or kayak would require wading out several feet into deep grey mud.  For the time being, this access point is useless for boats.
On my previous visit in 2006, we also tried first to launch from this public access area, but the lake is open to the west and subject to heavy wave action when the wind is driving across the mile of open water.  On that visit, the waves were crashing in on the eastern shore, and we thought it prudent to go back to Highway 81 and enter at the rest stop.
The drought this summer has affected Silver Lake more than I have seen on other area waterways.  There is a band of several feet between the normal and existing shoreline. Setting off in our canoe from the rest area along Highway 81, we had to claw our way out into the lake through water less than a foot deep.  Even up to 50 or 60 feet offshore, the depth was frequently only 18 inches or so.
Throughout our cruise, we rarely came across depths that exceeded four feet.  When the South Dakota Game Fish and Parks survey crews reviewed lake in 2008, the maximum depth was seven feet and the average depth was 3.5 feet.  So, while we did not have to get out of the canoe to drag it off a shallow spot, a common characteristic of the lake today was shallow depth.
The lake is described by SDGFP as 393 surface acres, nearly four times the size of Lake Alvin.  It is oblong in shape with an east to west width of about one mile and a north/south length of also a mile, including a large bay located on the southeastern end of the lake. The shoreline generally includes a thin fringe of trees, usually only one or two trees deep.  The western shore is largely open, leaving the surface susceptible to prevailing westerly winds.  It would not take much of a breeze to create major wind wave action across the surface.
There is a low island located in the central area of the lake, and I found it impossible to resist landing on the island for a stroll around.  This island has no trees, only bushes set in sandy soil.


There were many pelicans loitering about the eastern shore of the island; the interior seems ideally set as a rookery for geese and other waterfowl during their nesting season.
We walked around the island looking at the plant life, shells, rocks, and traces of birds and fish.  The water seemed deeper around the island than in some central areas of the lake itself.
The flock of pelicans left the island shore as we approached and flew off to another spot on the northeastern shore.
There must have been nearly 20 pelicans in the group, and I was surprised to see them still here. Temperatures during the night have been falling to the high 20s or low 30s, and it seems time for these magnificent birds to wing their way further south to more agreeable climes.
Our tour of the lake continued past the public access area on the eastern side and into the large bay on the southwestern end.  We were able to enter the bay and paddle a hundred yards or so before being stopped by the shallow depths.

We backed around through the muddy bottom and continued our clockwise cruise back to the “put-in” at the rest stop on Highway 81.
The water was quite calm and the only navigational difficulty was the shallow water and occasional rocks that would normally have been deep under the surface.  We were concerned about the possibility of having to get out of the canoe to drag it through shallows; the deep mud suggested that we would sink up to our knees in the mud if we had to exit the canoe.  As it happened, though, we were able to continue without incident for a two-hour cruise around the shoreline.
It is always gratifying to be able to go out in a canoe or kayak this late in the season.  The water is cold, and soon the lakes will start to freeze.  There are only a limited number of cruise opportunities left in the year, and many of us want to squeeze whatever we can out of the remaining season.  By the time we got off the water around noon, the temperature had risen to about 50.  It was a great day to be out on the water!

To view my 2006 narrative of the first Silver Lake cruise, please look at the area waterways menu along the right side of the blog for the Silver Lake link. 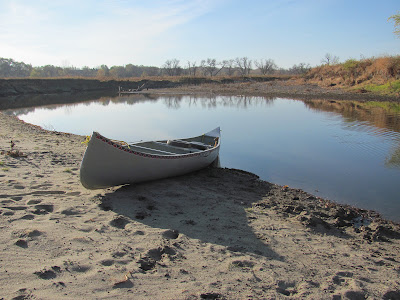 A little over two months ago, Dave Finck and I canoed down the Big Sioux River from the new put-in along Rice Street at the edge northeast end of Brandon to the take-out at the Big Sioux Recreation Area, a river-distance of about 2.5 miles. The river level was quite low in the first week of August, and we wondered what it would be like now after more than two months with only a very little rain over the intervening time. 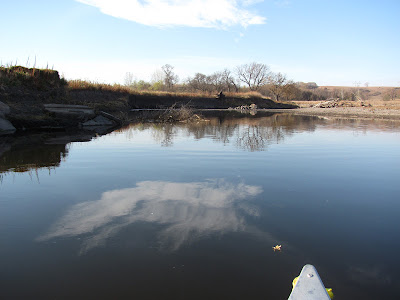 We set off from the developing SDGFP launching site near the Brandon bridge over the Big Sioux River at Rice Street.  The river looked much as it did two months ago; as the drought has continued, the river has tended to become narrower.  Still, there is a channel that provides enough depth to easily float a canoe or kayak.  The problem, of course, is to find and keep to that channel going downstream. 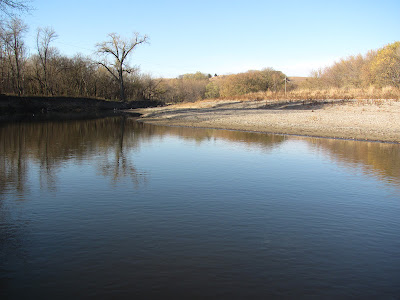 The temperature was in the 30s as we set off under sunny skies with no noticeable wind, and it climbed to about 50 degrees as we finished the cruise.  The width of the water flow varied from 50 feet or so to perhaps 6 feet in narrow passages.  In those narrow slots, the depth would sometimes reach deeper than the length of a paddle and the velocity of the flow would markedly increase. 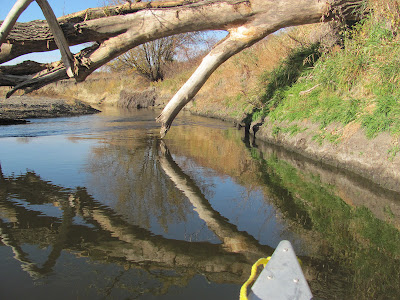 At other times, the width would increase with a corresponding decrease in speed and water depth.  On the wider stretches, we would sometimes miss the channel and find ourselves scrapping along in water only a few inches deep.  On a couple of occasions, we jumped out of the canoe to drag it off a bar and into deeper water. 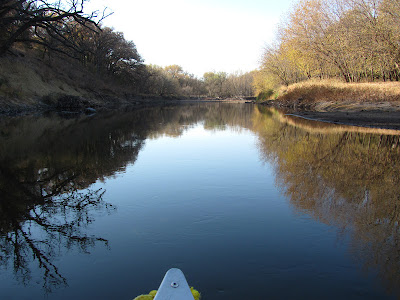 The banks of the river, the temporary beaches along the lower shore, and the tangle of dead trees that could be strainers during times of high flow were all highlighted during this time of exceptionally low water during the drought. These sights offered a marked contrast to the spring and summer landscape when the river is fuller and faster. 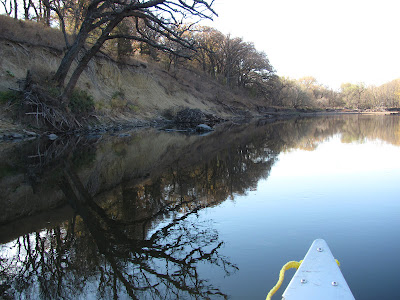 The fall is rapidly descending across the landscape.  It has been a couple of weeks since the first “killing” frost, and the leaves are dropping from the trees.  The landscape is assuming the bland winter look along the river. 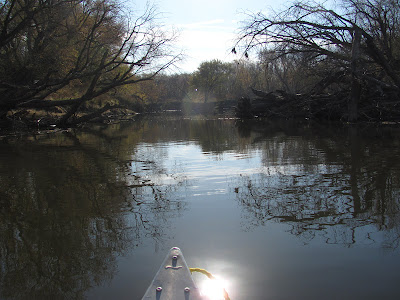 We saw a mink and lots of birds.  A few fish were jumping.  But, I didn’t see any bugs.  Perhaps the arriving frost and the first temperatures into the 20s has caused the insect population to burrow down for the next months. 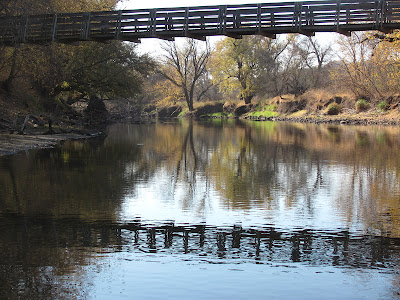 The South Dakota Department of Game, Fish, and Parks is further developing the two launch sites along this 2.6 mile section of the river.  I would think that this short cruise will become increasingly popular over time.  The river flows through park-owned land, and this provides the background for a scenic cruise and the likelihood of wildlife sightings.  It really is a pleasant one-hour cruise that I will probably take many times over the years. 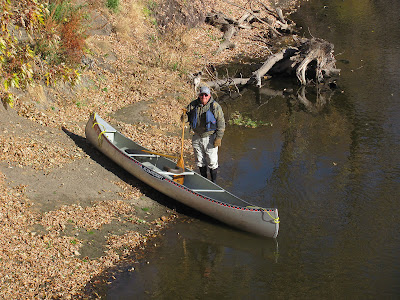 For a contrast in the appearance of the landscape from mid-summer to mid-fall, you can check my last Brandon-to-Brandon cruise.