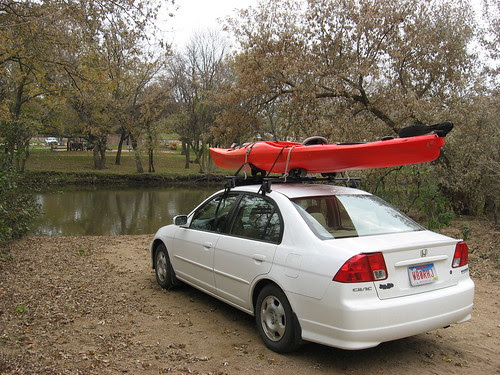 This was the second day in a row now with no rain in Sioux Falls. As planned, I took my kayak out on the Big Sioux River for a short cruise from the 26th Street launching point upstream to the bicycle trail bridge – a round trip of about 2.5 miles. 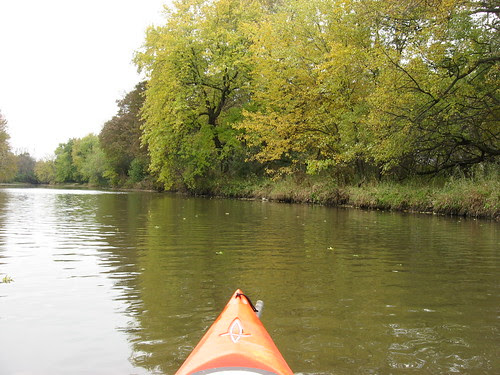 Over the past two or three years, this launching point just off 26th Street has become quite a popular spot for area kayakers. Whenever I am passing over the bridge on 26th Street, I find myself looking for kayaks on the river or cars at the launching point. A leisurely paddle upstream to the rapids under the bicycle trail bridge takes about 30 minutes, and the trip back might take 20 minutes. I usually take an hour for the cruise: paddling, checking out the banks, looking at the trees and birds, taking a few photos, and letting my mind wander. This cruise is sort of like a walk in the park – nothing dramatic, just a contemplative hour on the river. A paddler can also go downstream toward Falls Park, but that usually means a shuttle has to be arranged. 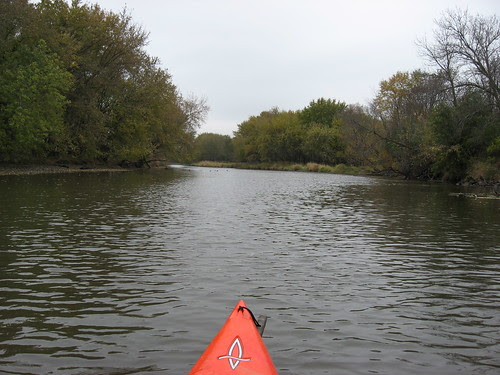 Today I set out about 10:30 a.m. under overcast skies with temperatures in the high 40s. The river depth at the 26th Street bridge is about 4 feet now, and there was adequate depth all along the course of the cruise. For the most part, water depth was 2-3 feet with some deeper spots of perhaps 5 feet. Getting out of the channel – misreading the river – could also bring my kayak into shallow spots where it scrapped along the bottom in water just inches deep. 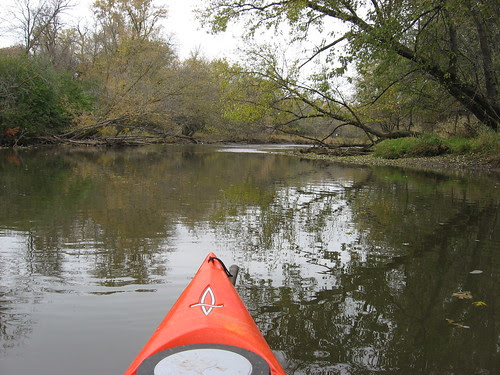 As I passed Camp Leif Erickson along the right bank going upstream, I looked at the camp structures and thought about the thousands of kids who have enjoyed their two-week camping experience over the years. My two sons were both five-year campers at Leif Erickson, and the grounds hold a lot of memories for both of them – and for their parents! Everything is quiet now as the camp awaits the long winter. 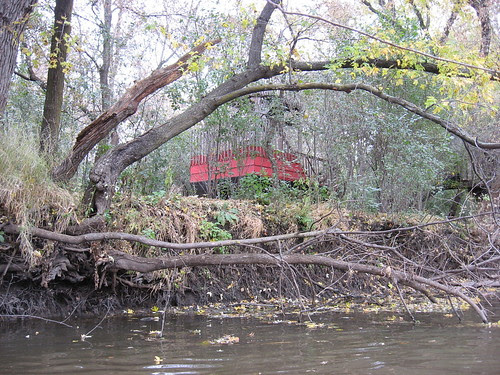 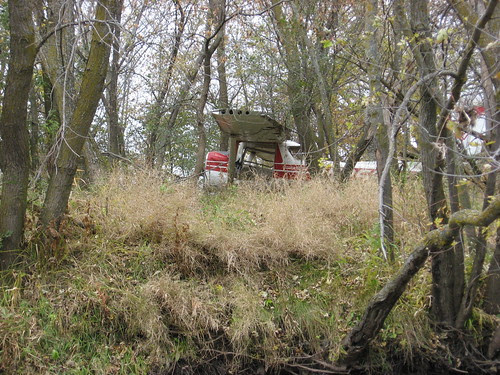 From time-to-time through gaps in the trees, I could spot a bicyclist on the bike trail over off the left shoreline moving ahead with stocking cap, coat, and gloves. Upstream, near the bike trail bridge, I came across two deer. They did not seem too spooked and just stood there for a time looking at me and snorting. 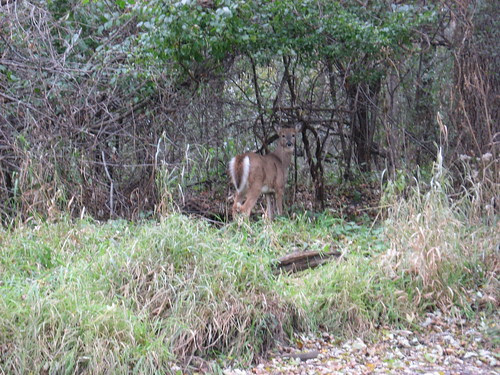 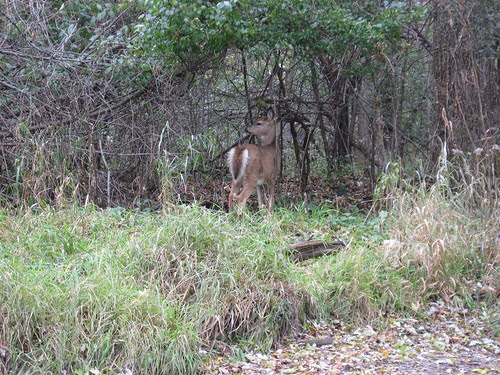 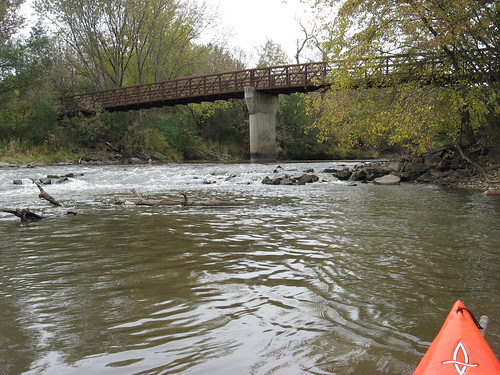 So, the change of seasons is very apparent on the Big Sioux River. Everything is turning a wintry brown. Here in the Sioux Falls area, there are not likely to be many more paddling opportunities this year. Still, I am not going to take the rack off the car just yet. I am hoping that there will be another sunny day with temps in the 50s. Lake Lakota, in the Newton Hills Park, seems like another good place to visit – a place where guys in red hats with guns are not likely to be found.
Posted by Jay Heath at 2:08 PM 2 comments: 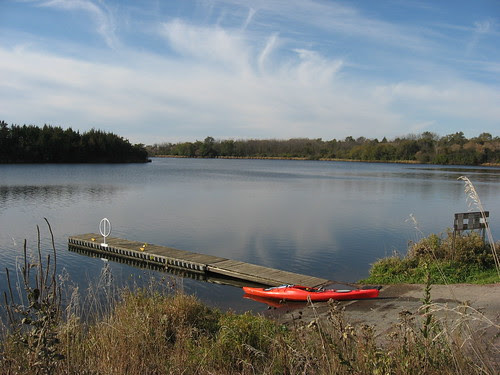 Winter came early to the northern plains this year. The first temperatures in the 30s arrived in September, and by early October a killing frost brought the growing season to an end. There have been three snowfalls this month, and each left from one to three inches on the ground. For the past two weeks, there seems to have been constant cloudy and rainy weather. I cleaned out the hall closet and found my boots, gloves, hats, and coats. The snow brushes and ice scrappers have been found and placed in our cars. The snowbirds (those who escape the winter up here in the north and head for sunny climes in southern or southwestern states) have either gone or are planning their departure. 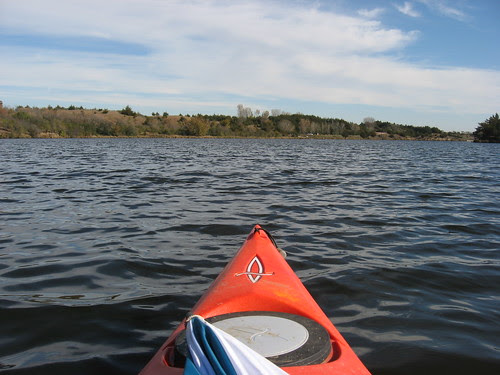 But, today we had a rare sunny day with temperatures in the 50s. It was an irresistible opportunity for a fall cruise, so I loaded up the kayak and headed to Lake Alvin. Pheasant hunting season began this past weekend, and it seemed prudent to restrict my kayaking to lakes within or bordering on state parks or the Big Sioux through Sioux Falls. Guys with red hats, guns, and big dogs make me a little anxious, and being on the lookout all the time for hunters or listening to booming shotguns destroys my sense of tranquility on a paddle. So, Lake Alvin it was! 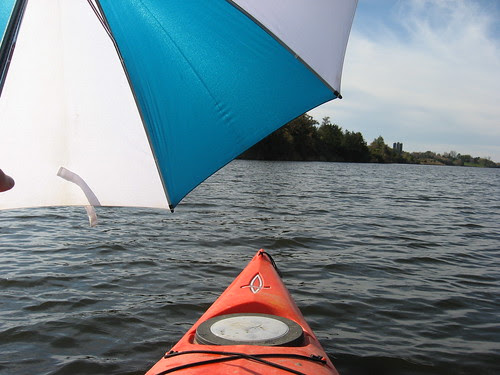 When I arrived at the public access area on the southwestern shore, there was a posted notice from the SD Game, Fish, and Parks that read “No Vehicles Past This Point.” That seemed to mean that it was prohibited to drive up to the parking area or approach the dock by car. Since I have a park sticker, I just left and drove over to the Recreation Area on the north end of the lake and launched at the dock there. On my drive through the Recreation Area, I came across a Game, Fish, and Parks guy in a pick-up truck. I asked him about the sign, and he said that it didn’t mean “no vehicles” really. It was an effort to keep all-terrain vehicles from entering the property and chewing up the hillside. To me, the sign did not convey that message, and I wondered how many boaters or fishermen have been inhibited from use of the public access area by this posted notice. The guy left me a message on my windshield letting me know that cars were okay at that site. 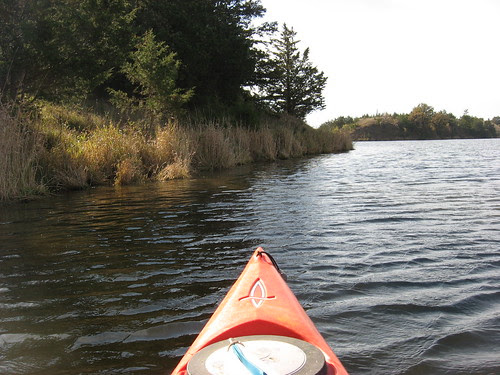 There was one boat out on the water as I launched: a fishing boat with a guy wearing a bomber cap with earflaps pulled down and a bulky coat. I was in rolled up shirtsleeves. I set out from the dock in Recreation Area and headed north up toward the swimming beach, moved over to the eastern shore, and headed downwind to Nine Mile Creek, my favorite part of the lake. The wind was moderate and offered an opportunity to use my umbrella sail for a few minutes. 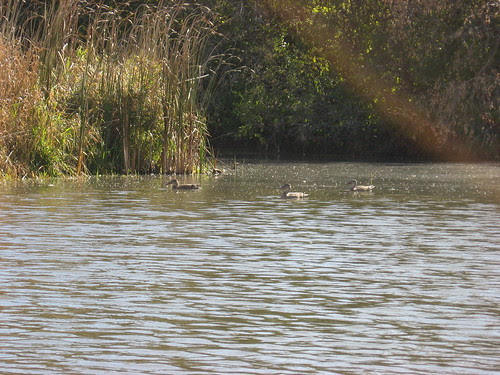 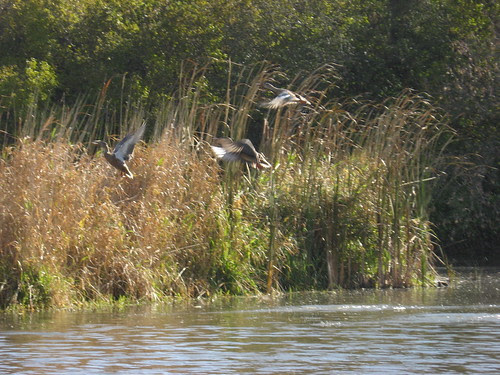 Moving up Nine Mile Creek, I kept a lookout for animal life. A rustling in the dry grasses tipped me off to some critter moving along the shore, but on the two or three occasions that I heard such scurrying, I did not see anything. Much of the shoreline grass has lost its color and flexibility. Many of the trees have lost their leaves. This cold weather has also killed much of the algae on the lake, and visibility extends down a couple of feet in many places. 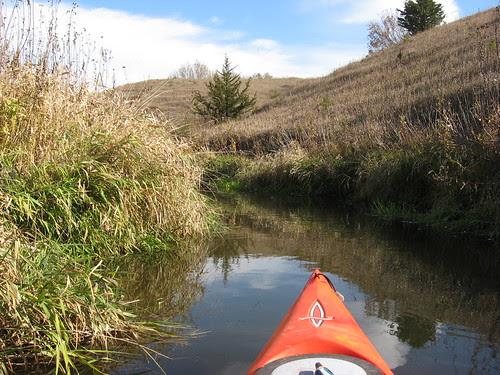 There is plenty of water in the lake, and the Nine Mile Creek channel is generally from two to three feet in depth. I was able to move up the creek until it narrowed to a two or three foot gap and finally became too shallow to proceed. There were a few ducks still hanging around and the very occasional insect, usually a bee. I had an enjoyable 90 minutes or so on the lake today. 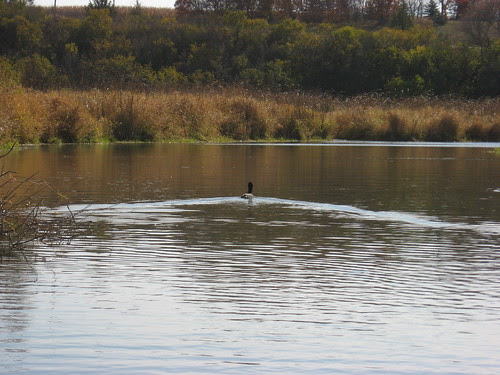 The weather for the rest of the week is forecast to be rainy. Maybe there will be a brief time in the morning before the rains begin for the next few days, and I decided to leave the kayak on my car in hopes of a Big Sioux River paddle within Sioux Falls. I hate the thought of taking the rack off my car and storing all my paddling gear for the next five months.
Posted by Jay Heath at 4:19 PM No comments: