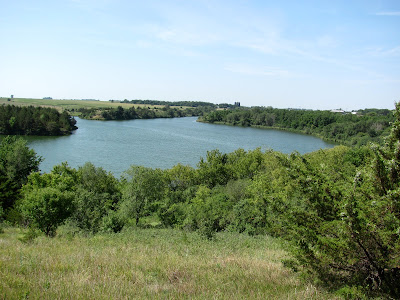 After a full agenda of family activities and days of blistering heat, I was able to get my kayak out on the water today in the cool of the morning.  Since Lake Alvin is so close and always calling, after my morning read and two mugs of coffee, I headed out to the public access area on the southwestern end of the lake. 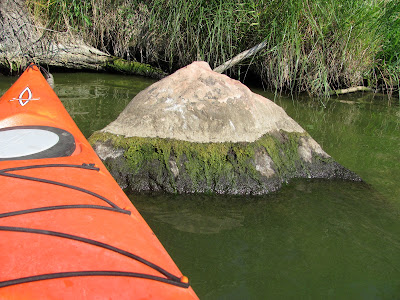 I wondered about the effect of the drought on the lake, especially on the waterway leading up into Nine Mile Creek. Although the lake seems to be down about 5 or 6 inches, as demonstrated by the water marks on rocks, only limited effects were observed on the cruise today.  Lake Alvin seems less affected by low water than Beaver Lake or Lake Lakota or even the Big Sioux River. 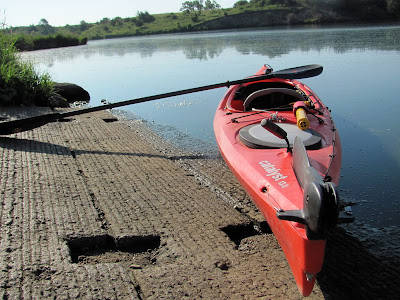 There was some heavy algae in the waters around the dock and at points on the run up into the creek.  Generally, however, the scum on the surface tended to disappear as I continued.  There was plenty of suspended algae in the water, but that seems common as the summer wears on. Jumping carps at times reminded me of rapids in the area streams.  I was even splashed a couple of times from near jumps by big carp. 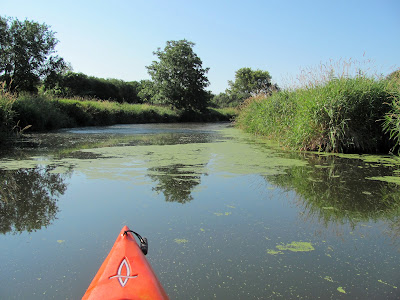 As usual, I headed across the lake and up into Nine Mile Creek.  While there is some shallow water at the mouth of the creek, I was able to easily negotiate that section and move into the deeper channel that continued up past the bridge and into the narrow waters that continue south. 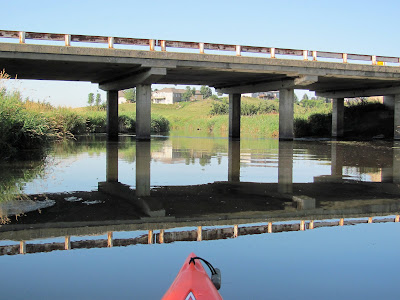 Nine Mile Creek still has ample water to navigate about a mile inland.  Just short of the usual blockage, I ran into water too shallow to continue and easily turned around for the cruise back downstream into the main body of the lake.

Going downstream is a great opportunity to observe bird life, and I found myself stalking interesting birds in hopes of a good photograph. 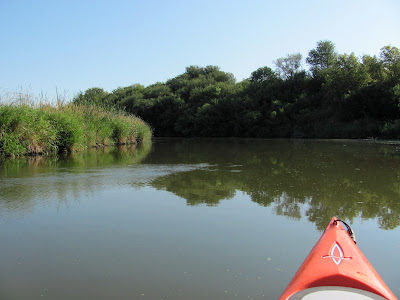 For some time I have been concerned about my endurance and strength for paddling, especially for lake waters with no current and only the wind as a variable.  Today I wanted to get in some stiff paddling down to the north end of the lake, and I concentrated on maintaining a brisk pace.

Along the way, I came across a great blue heron that had skipped several hops ahead of me on the way to the northern shore. 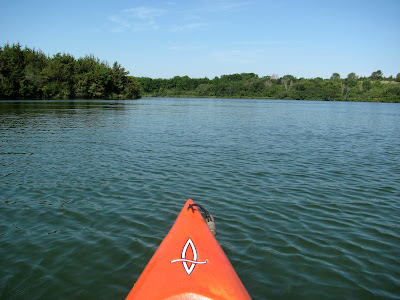 Passing the Recreation Area launching ramp, I noticed an odd looking craft with two guys standing nearby.  After finishing my paddle, I returned to the Recreation Area in the northwestern part of the park and met two gents who were messing around with that craft while fishing. 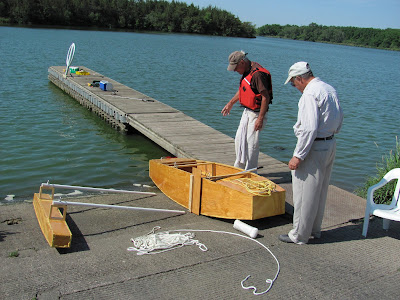 One of the guys was the builder of this craft.  He set himself the challenge of building a boat for less than $100, and the result is an 8-foot pram with a high freeboard.  The craft is 8-feet long because that is the size of a sheet of ordinary plywood purchased at a local lumber outlet, and the cost includes the wood, varnish, glue, and fixtures. 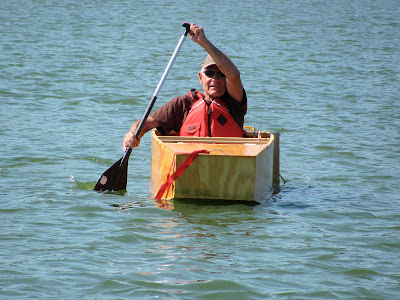 An outrigger was also constructed to provide stability for fishing.  With the outrigger, the paddler sits in the center on a lawnchair and uses a “j” stroke to propel the boat.  Without the outrigger, the paddler has to sit on the bottom of the boat; the sides are too high to permit a double blade paddle, and it is awkward to switch sides with the high sides.  So, a single paddle is used. I left as the craft was pulled out of the lake and loaded into the back of a black Honda Element. 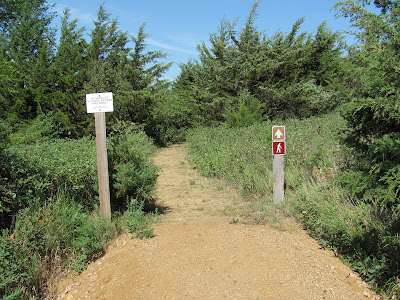 After visiting with these two guys, I headed up into the hiking trail that has recently been developed leading from the parking area of the launching ramp into the brush along the shore and up into the hills overlooking the lake. 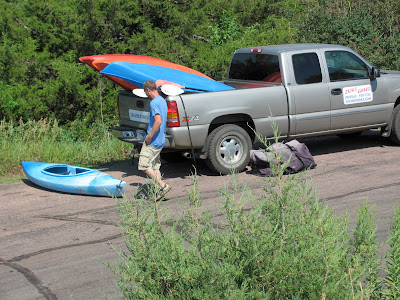 When I returned, I found Zach, of Zach’s Kayaks, at the launching ramp with a pick-up full of kayaks as he was outfitting a young lady who was about to move out on her cruise.  Zach’s Kayaks seems to me to provide a great service to someone who wants to go out for a paddle now and then without the burden of owning a boat – or for someone who wants to try out the sport. 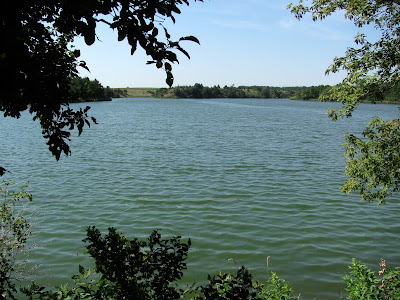 My cruise today was about two hours; once again, I felt as though I need to go to Lake Alvin more often for the exercise and ease of transportation.  It is only 15 minutes from my driveway, and there seems to nearly be something new and interesting to observe.

Those interested in seeing the complete set of photographs from this cruise, please go to the following URL:  http://www.flickr.com/photos/jayheath/sets/72157630532395414/

This past week I had the opportunity to kayak on Lake Michigan with one of my sons.  We were up in Door County, Wisconsin, for a few days to visit with our son, Jason, who has played for several summers in a really fine classical music group at the Midsummer Festival, which features concerts at most of the villages within Door County.  For the past seven years, we have gone up to the Door County to stroll the beaches, bike the great trails, hike along the coast, shop the great variety of boutique stores, and enjoy a great variety of restaurants, none of which are chain related. The environment of Door County is decidedly nautical and reminds me of coastal New England. 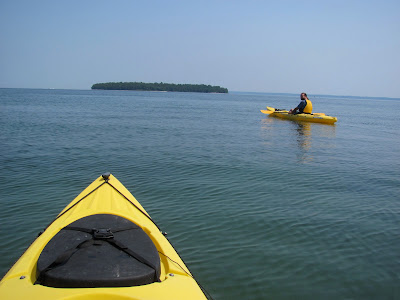 One of our activities this year was a kayak cruise out to Horseshoe Island, an island off the Green Bay side of the Door County peninsula.  The put-in was a beach within Peninsula State Park between the villages of Fish Creek and Ephraim. 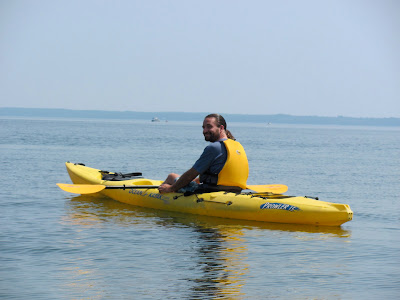 Horseshoe Island is located a mile off shore in Lake Michigan.  While the island is now part of the state park, it was one of the original settler locations in the northern part of the peninsula in the mid 1800s. 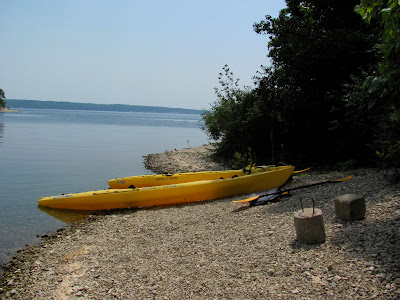 The passage between the island and the peninsula has a good deal of traffic, both power and sailing craft.  As I gazed out over the water, I had visions of big wakes from motorboats creating a series of waves that might lead to a capsize in very deep water far offshore.  But, lots of people kayak most days out to Horseshoe Island, and I was fairly confident that we could make the crossing without incident. 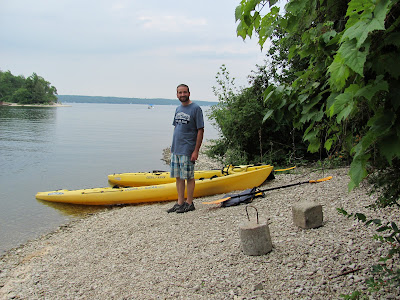 A kayak rental concession operates in the park, and we rented two Ocean Kayak sit-on-top boats.  This was my first time using a sit-on-top.  They are easy to get on and tracked pretty well.  They are slow, of course, and you sit with your legs at an angle within a series of slots built into the hull to support your feet, a position that created some cramping after a while. 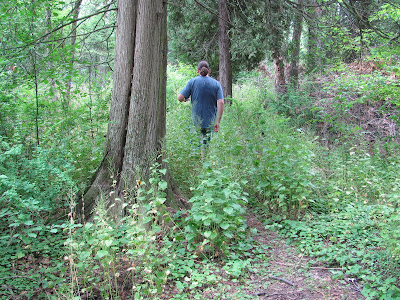 I was relieved as we arrived at the island.  The shoreline where we landed was quite rocky, and I was without my aqua-socks.  Hobbling around on the rocks while heaving the kayak up on the shoe was a bit painful.  I had my shoes in a storage bin on the hull, so I was ready for a hike into the interior of the island. 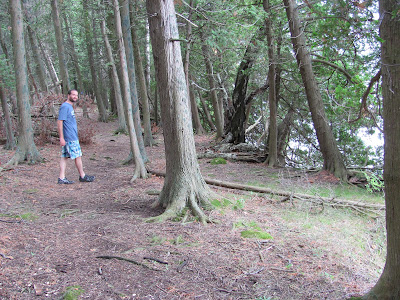 There is a hiking trail that runs for one kilometer around the perimeter of the island, along the coast, into the woods, and up and down some slight hills.  There are spots on the coast that have a cliff over the shoreline, and there were occasional fallen trees across the path.  A few service type small buildings and the foundations of earlier buildings from a past when people lived on the island are to be found along the path. The hiking path is not groomed, but it is easy to follow it around the island. 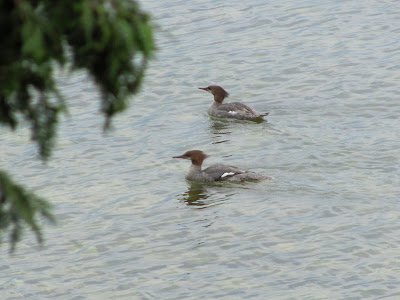 The trip back across the passage was also uneventful.  I found myself apprehensive at the sight of motorboats approaching, fearing the waves associated with a deep wake.  But, each time the skippers cut their power, I paddled on, and the peninsula grew closer.  I found my energy lagging toward the end.  I suppose that the strain of apprehension regarding wakes from motorboats drained me, and the paddle itself and the hike around the island contributed.  Finally, the uncomfortable posture of paddling the “sit-on-top” took its toll as well.  Still, this was a great day of paddling for me: an opportunity to go paddling with my son (34 years younger) on the big waters of Lake Michigan, landing on a new island, and then hiking around it .  It was as good as it gets! 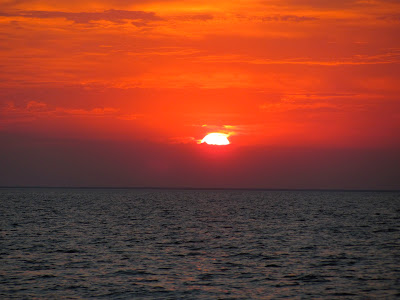