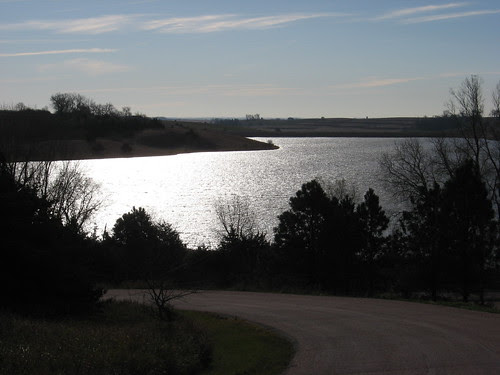 Fall is usually a short season here on the northern plains. We are only a weekend away from November, and the first snow fell here in the Sioux Falls area this week. The temperatures have fallen into the 20s the past couple of mornings, and the birdbaths in our yard have frozen solid. We had howling winds of up to 50 mph the past couple days, and our dog, Finnegan, has needed his coat to go walking. But, the forecast for today was for calm winds and a high into the 50s: a perfect day for a late fall cruise. 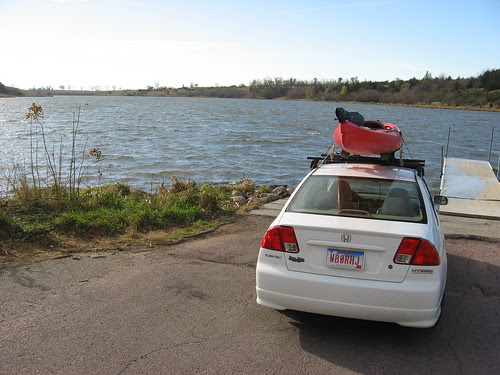 As I set out this morning from our eastside Sioux Falls home for Lake Lakota, the temperature was up to 39 degrees. As I headed south to Canton and on to Newton Hills, my Honda Civic hybrid with the kayak strapped on top began laboring into a south wind. The battery for the motor assist dropped down to a single bar, and the car could not go any faster than 50 mph. The wind seemed a bit stronger than predicted. 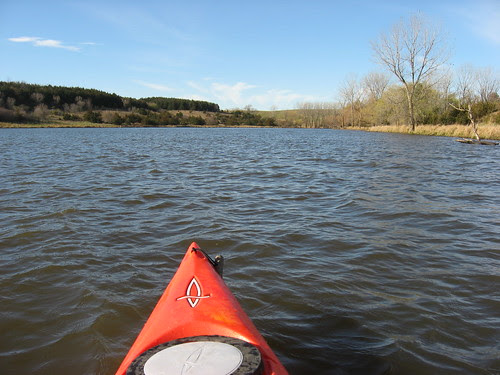 When I arrived at Lake Lakota about 10:30 a.m., the area was deserted, much as I expected. The wind was whipping down the lake out of the south, and the waves were rolling into the dock and beach. 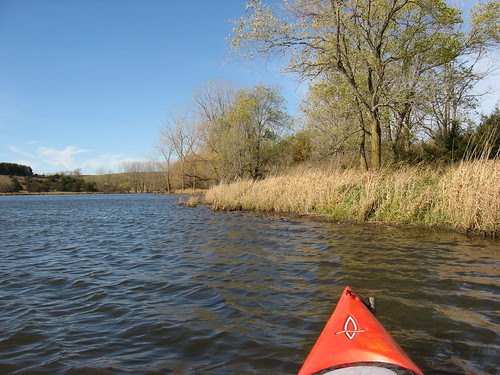 I thought it prudent to avoid the rolling waves at the boat ramp and instead launched from the beach. Right away, I took on a wave into the cockpit of the kayak; this caused me to turn into the western arm of the lake where there was some shelter offered by the opposite bank and trees, bare of leaves as they were. There was an effect much like a curtain across the lake separating the calm western arm from the north/south orientation of the main body of water and the wind and waves rolling south. 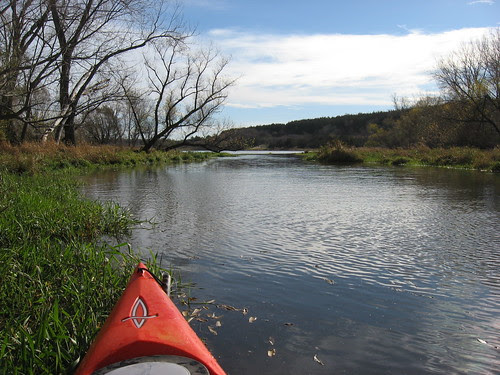 Into this calmer portion of the lake, I cruised along the shoreline looking over the landscape. I came across a muskrat and a few duck-like birds. Overall, though, there was a quiet and settling aspect about the lake: winter is coming on, and the trees and bushes are settling in for a long sleep. No turtles were to be seen, and much of the waterfowl has now moved on. The thick aquatic grasses that clogged the waterway have nearly disappeared. The bottom was visible at 3 or 4 feet. 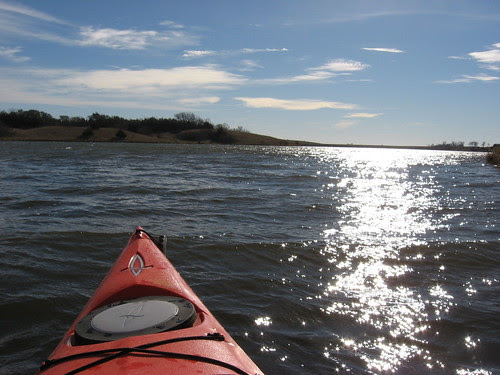 Coming back out of the western arm, I encountered heavy waves and a strong south wind. Padding required effort and I had some anxiety in the big waves. On a second attempt, I made the point and continued south into the main body of the lake, hugging the shoreline. Once heading south, it seemed dangerous to try turning around; I didn’t want to broach in the waves, especially alone on the chilled water. 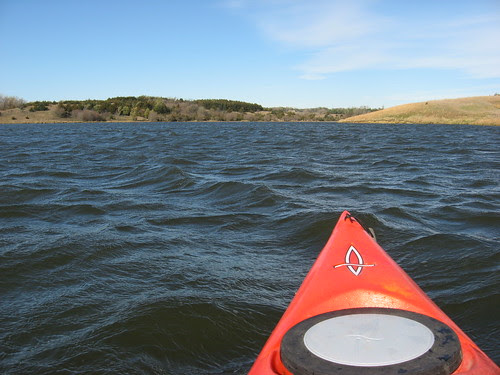 There is a public access area on the west side of the main body of the lake, and I ducked into the short inlet provided for fishing. This sheltered area provided a chance to rest and assess the risk of heading further into the heavy waves on my way to the dam at the south end. While in the inlet, it seemed that the wind shifted west, and the passage south seemed less threatening. I continued up to the dam, passed over to the east side of the lake and made my way across the waves to the first inlet available, relatively near the launching area and dock. 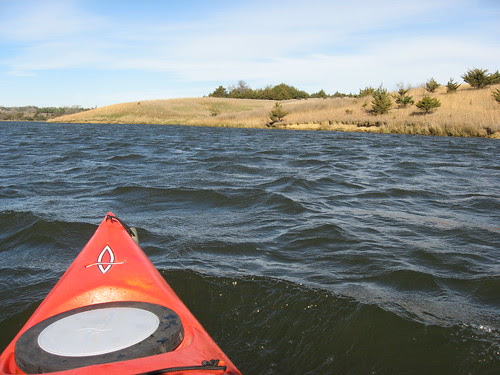 The inlet offered calm water and a chance to look over the changing landscape, a last opportunity to see any wildlife. Sure enough, my passage stirred up a great blue heron that flew over and near my kayak. 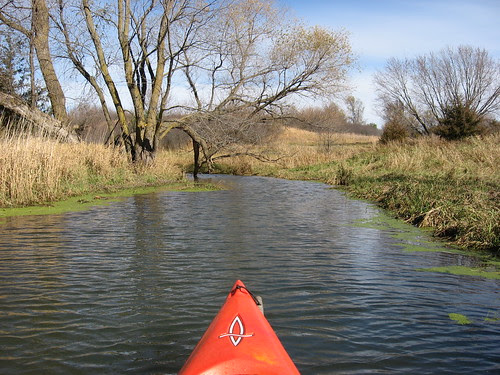 After cruising down to the end of the inlet, I reentered the main body of the lake and made my way across the waves, past the dock, to the beach area. 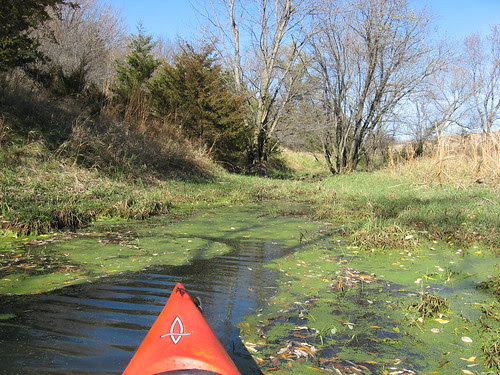 I was out on the lake for about an hour and a-half, time to reflect upon the changing season, thinking about late March or early April when I again make the trip to Lake Lakota. Spring: already, I am anxious for it. 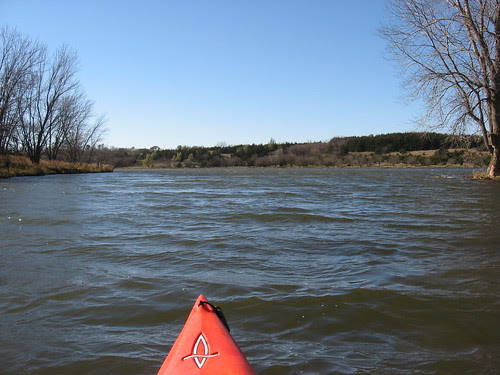 The weather forecast seems relatively good for the next few days, so I will leave the kayak on the car in hopes of going out to Lake Alvin again. The older I get, the more I dread the coming winter. But, as we all know, it is the experience of winter that makes spring on the northern plains so anticipated. By January, the time of the South Dakota/Kayak Annual Conference, we will all be thinking about the coming season – by then only eight or nine weeks away. 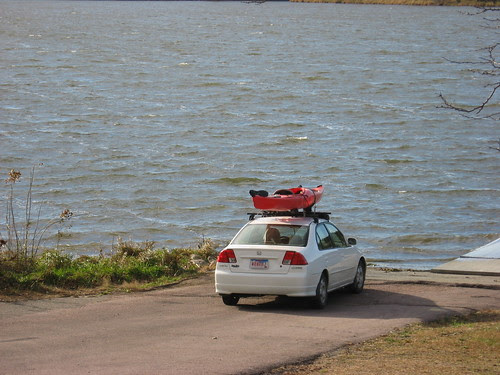 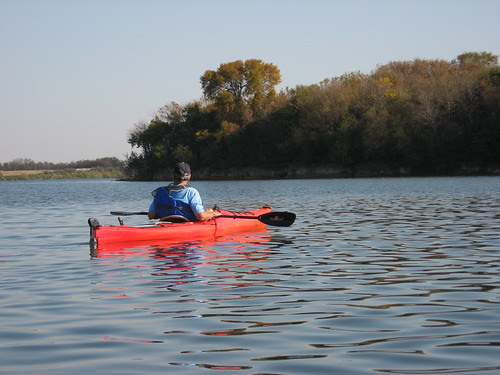 I was traveling overseas during the last part of September and have not been out on the water for the past two and a-half weeks. We have a guest visiting here now from California, and today I took him kayaking on Beaver Lake (see past Beaver Lake narratives on the menu at the right side of the blog home page.). 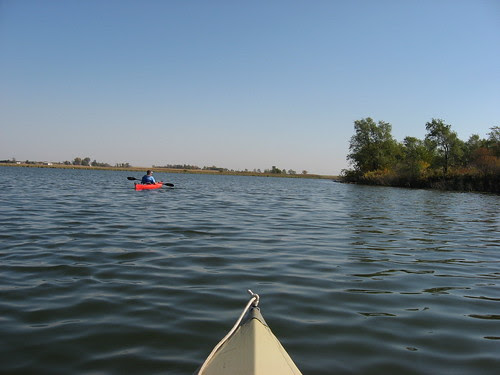 We got a late start this morning and arrived at Beaver Lake about 10:30 or so. There were a few other people on the lake today, mostly retired type gents out fishing in boats or from the dock. There was very light wind when we started, and that wind just diminished as the morning wore on. The temperature was in the 70s and the sky was clear: a beautiful fall day in South Dakota. 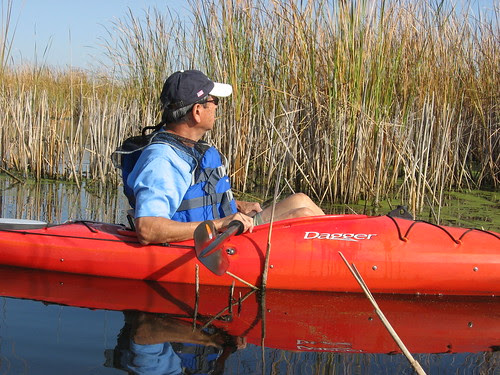 My friend, Bill, used my 13-foot Dagger, and I took the Folbot. We set out from the ramp at the public access area and headed out toward the island. I had hoped to see a variety of waterfowl, as I normally do; today, though, there were no birds visible on the island. We cruised along the shoreline looking into the island through the trees and bushes. Fall is in full form by now, and lots of the trees and bushes are changing colors, some are already bare and getting ready for the long winter months. Today, though, was almost a step back into summer. The water got calmer and more reflective as the morning moved on. Nearly always my next stop along the Beaver Lake cruise is around the island, along the shoreline to an entrance through the reeds to a wonderful wetlands made up of a channel leading into a large pool hidden away from the lakeshore. The landmark for this channel entrance is an old windmill just inshore but easily visible from the lake. 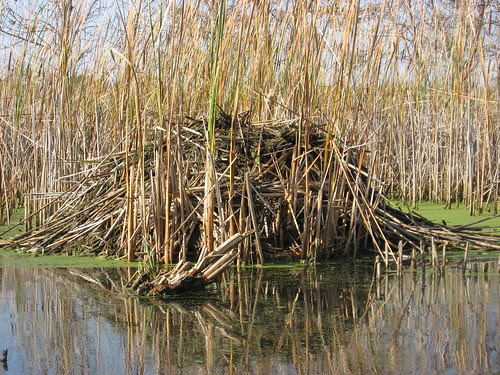 In this channel and in the pool are a number of large beaver lodges that seem to have been freshly rebuilt for the coming winter. The last time I came up this pathway, there were a couple dozen egrets nesting. Today, the egrets were not visible; perhaps they have left for a land with a gentler winter. Instead, we saw perhaps ten beaver lodges. 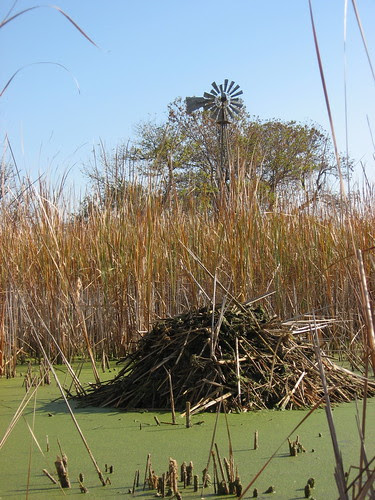 I find great tranquility moving slowly and silently through these waters looking at the wetlands community of cattails, lodges, and usually a large number of waterfowl. 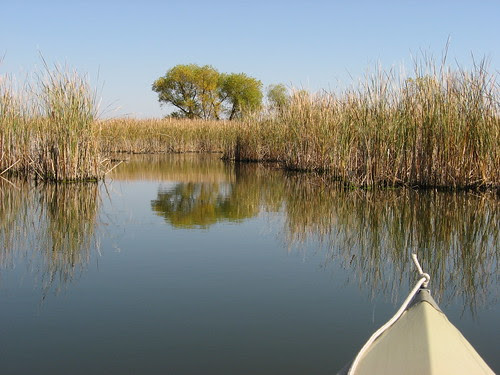 We then moved to the northwest corner of the lake and into a wetlands area that I had not seen before. Maybe the high water level has created this new opportunity; today it was another entrance into a channel that runs west into the reeds for a few hundred yards. 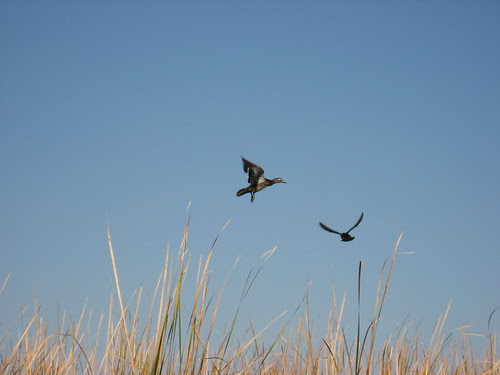 This is the spot on the trip where we at last ran into substantial numbers of waterfowl and perching birds. I also saw a beaver swimming down the channel towards me, but I was unable to get my camera ready before he submerged. We continued until stopped by a barbed wire fence across the channel. 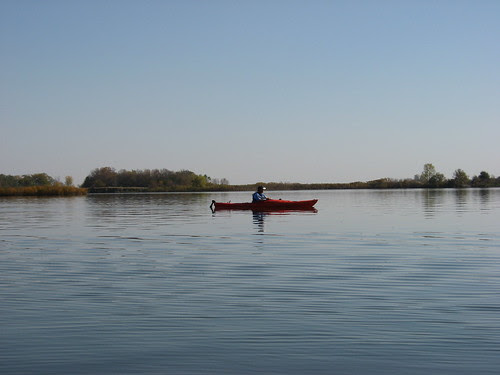 After spending an hour and a-half or so paddling, we headed back to the dock. It was a really fine day to spend in South Dakota. Some people consider Beaver Lake as one of the best paddling areas in the area. I also really like this waterway, but about half of my experiences on this lake have been in quite windy conditions. When the winds are calm, I love Beaver Lake, especially for the bird life along the island and into the wetlands. When there is a wind out of the west, though, this can be a difficult paddle through sometimes big waves, at least big waves from the perspective of a kayaker. 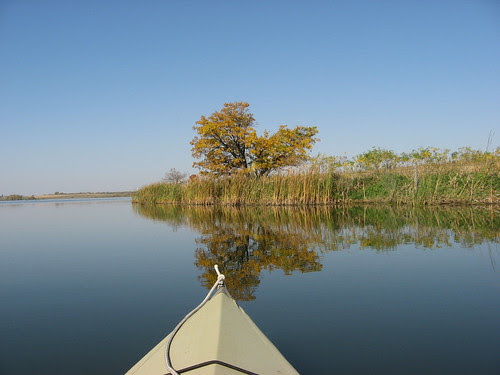