Split Rock Creek - Up Through the Palisades in Late Fall 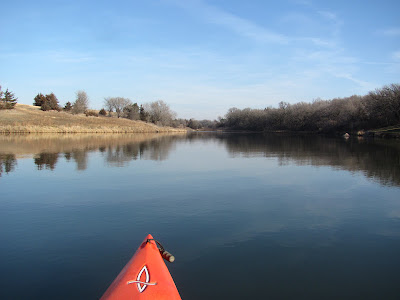 When Dave Finck went out to the Garretson City Park to check out the flow of Split Rock Creek upstream through the palisades last week, he found the surface ice covered.  It looked as though cruising on this especially scenic waterway was over for the season. 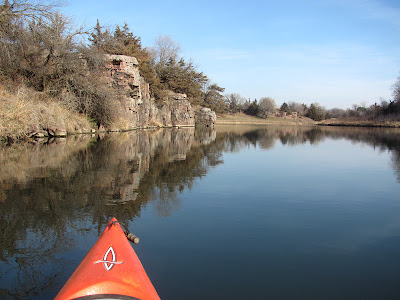 The last few days have seen a warm-up on the northern plains, so Dave and I arranged to meet at the put-in for this section of Split Rock Creek this morning.  It was 44 degrees when I arrived about 10:15 a.m., and the only ice we saw was on Devil’s Gulch, upstream into the shadows. 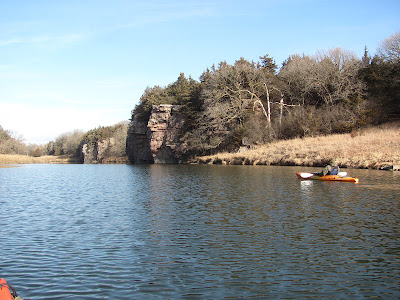 So, we launched our kayaks and proceeded north upstream on a beautiful sunny and nearly windless day.  It was a magnificent morning to be out on this slowly flowing body of water.  The water depth is down a foot or two, but that has little impact on kayaking.  For most of the trip upstream, the water was too deep to touch bottom, even with a double-bladed paddle thrust down to the maximum. 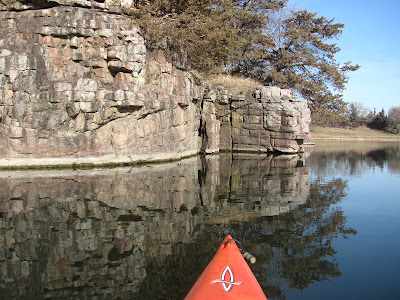 The sun on the east side of the creek cast the high quartzite formations in shadow across the water.  The landscape has become monochromatic in shades of brown as the winter approaches. The only sounds were birds up on the cliffs and in trees as well as a few squirrels rustling in the blanket of leaves covering the ground.  We saw a flock of wild turkeys up on the northern end of this waterway.  They were up on the floor of cliffs towering above us and then flew across the creek to land in the high brown grass on the western side of the creek.  The flock of perhaps 20 birds was visible both high on the cliff and standing around in the grasses of the shoreline. We also saw one deer dashing about on the eastern shore. We continued upstream through the spectacular cliffs and rock formations until we reached the course of the creek coming down through the state park. 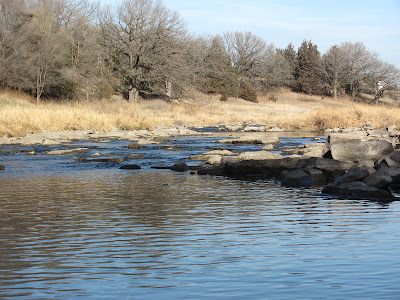 Our return trip downstream was slow, offering an opportunity to appreciate this unusual landscape of cliff faces and oddly shaped trees growing on ledges.  Even with the trees and grasses going into dormancy for the next several months, the play of light and shadow across the water was fascinating to observe. 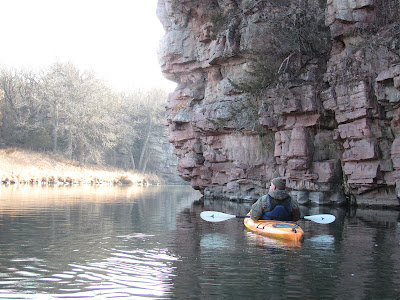 As we returned to the put-in, we ducked through the arched bridge to see how far we could proceed up Devil’s Gulch through the ice. 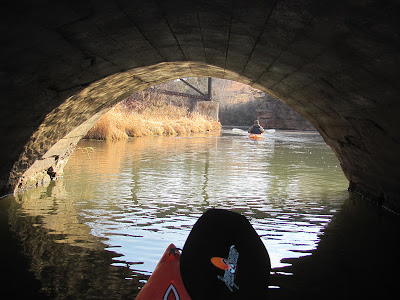 We found that there was a break in the ice along the northern shoreline, and we moved through this channel of nearly open water.  The ice formed just a couple of feet offshore and was perhaps a quarter of an inch thick at the edge, growing progressively thicker very quickly. 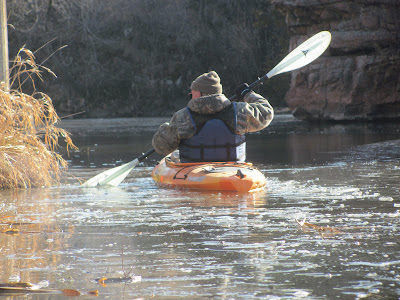 Dave was in front of me on the way in, and his kayak served as an icebreaker of sorts.  The ice was easily broken up for the first few couple of feet offshore, but the paddles just banged on ice just beyond that. 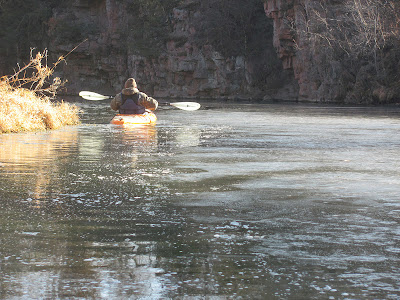 We continued on until the ice blocked further passage.  By then, however, we were too far up to turn around.  The ice-free channel was only a couple of feet wide along the side of rock formations, and we had to back up 50 feet or so before finding a spot wide enough to turn around without going up on sheets of ice. 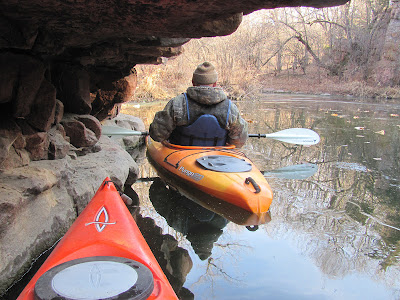 When we finished and drove through Garretson, the temperature had risen to about 53 degrees.  I don’t know if it will be possible to take another cruise this year; but, even if that should be the case, it was great to finish the season off with a great scenic cruise through the palisades of Split Rock Creek and then to cap it off with moving through an ice field. 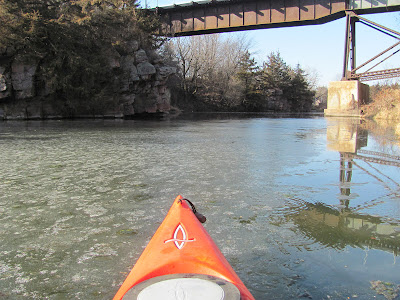 For anyone interested in the full set of photographs describing this cruise, please access my Flick account at the following URL:  http://www.flickr.com/photos/jayheath/sets/72157632049648877/
Posted by Jay Heath at 2:40 PM