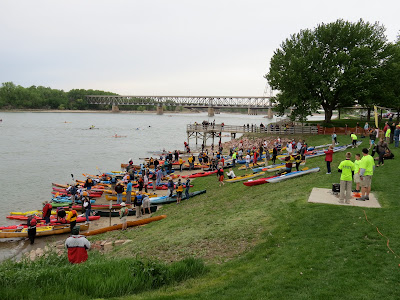 The third running of the South Dakota Kayak Challenge got underway this morning at 7:00 a.m.  The 72-mile race on the Missouri River began at Riverside Park in Yankton and concluded at Sioux City, Iowa.
As I left Sioux Falls at 4:30 a.m. and headed south down I-29 to the Vermillion exit, the wind was out of the southeast and there was sheet lightening off in the distant south.  The sky was overcast, and the temperature was in the low 50s.  It did not look very promising for a 72-mile river cruise heading southeast from Yankton to Sioux City.
By the time I arrived in Yankton about 6:00 a.m., the conditions had improved markedly.  While the sky was still overcast, the waters at Riverside Park were calm.  By 7:00 a.m., the skies had become partly cloudy and the sun was peeking out.  The temperature had climbed up to 61 degrees on the downtown bank thermometer by the time the fleet left.
SD Kayak Challenge officials included Jarett Bies, Steven Dahlmeier, and Cory Diedrich.  These leaders were supported by a large group of volunteers, many who have served in previous races.

The fleet was made up of 129 boats for the race this year.  The craft ranged from sleek surf-skis to short recreational boats and included both tandem and solo canoes and kayaks.

Some of the racers were within a competitive class, and they were serious athletes in excellent shape and usually equipped with sophisticated electronic equipment in their vessels to monitor location along the course and rate of speed. This class of paddler often also had a hydrating system to keep liquids flowing as they streaked along.
Those paddlers who were in the competitive class were provided an opportunity to gather upstream of the departure beach so that they could have an “on-water” departure.  The bulk of the fleet left from the beach. 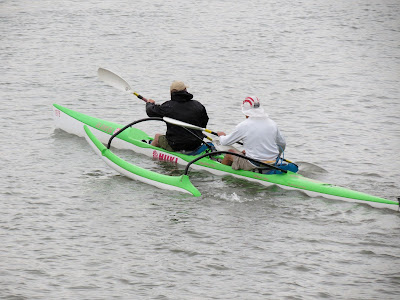 Soon, the 129 boats were underway and heading downstream in a rapidly spreading group that quickly became differentiated. The sleekest boats and strongest paddlers moved into the lead as they made for the first checkpoint 18.4 miles downstream. 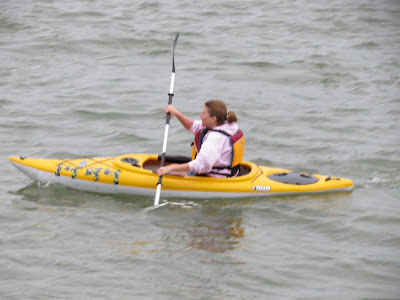 Most of the paddlers were in the race simply to participate and stretch themselves.  For most, just finishing the race was the objective.  Some of the boats were short recreational kayaks of just 10 to 12 feet.  While most were solo paddlers, there were also quite a few tandems, both twin cockpit kayaks and canoes. 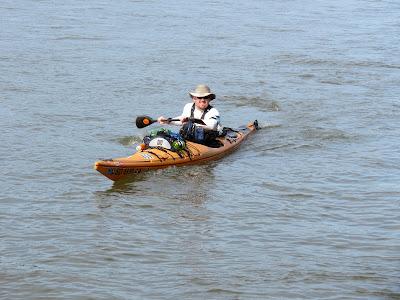 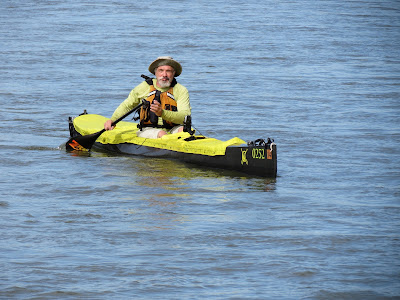 The first checkpoint for the race was Myron Grove, 18.4 miles downstream on the South Dakota side of the river. By 9:15 or so, the first boats were passing through CP #1. After the sendoff from Riverside Park, I headed to CP #1 and watched the first 25 boats pass through. Most of the paddlers just came by the dock, affirmed that their number had been noted, and cruised past for the next 12.1 mile segment to CP #2. Few of these lead paddlers came ashore at this point. There are a total of four checkpoints on the race before ending up at “Bev’s on the River” in Sioux City. 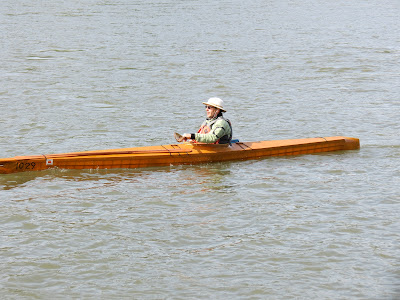 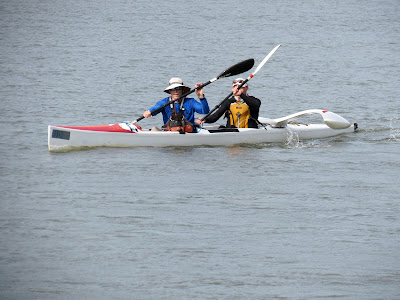 Motorboats had been enlisted to serve as safety vessels along the route.  In addition, the Yankton/Vermillion Amateur Radio Club (Hams) members were providing communication services with their portable radios. 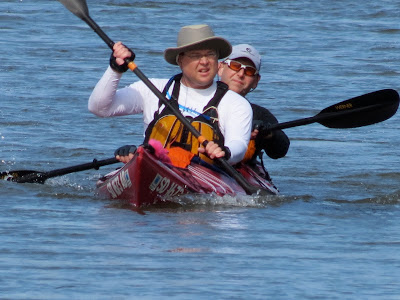 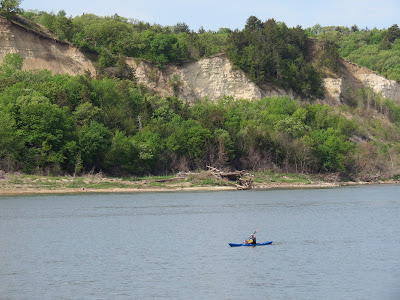 For additional information on the history of the SDKC, the following URL is recommended: http://sdkayakchallenge.org/about.htm. 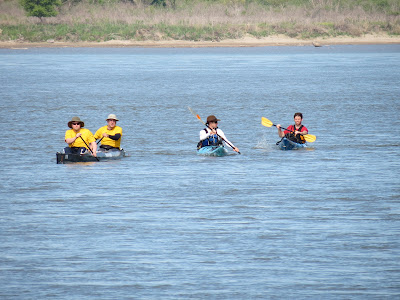 For those interested in viewing the complete set of photographs for this narrative, please go to my Flickr account at the following URL: http://www.flickr.com/photos/jayheath/sets/72157633700304976/
Posted by Jay Heath at 2:58 PM

This was a nicely run race with attention paid to all of the details. There were volunteers from the beginning to the end who took good care of those of us who were racing. South Dakota, Nebraska, and Iowa were lovely.