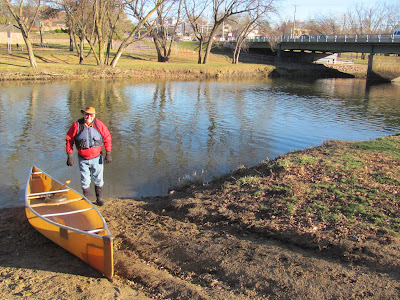 Yesterday after being unable to get out on Fensterman Slough as planned, Dave Finck and I decided to canoe upstream on the Big Sioux River from just beyond the bridge over 26th Street to the rapids under the bike trail bridge, a distance of about 2.5 miles round trip. 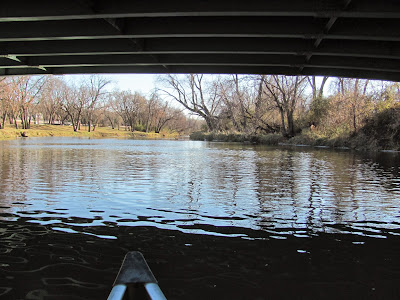 Whatever ice had been on the Big Sioux River through Sioux Falls had melted with the warmer temperatures, the wind, and the river current.  There were only traces left along some of the shoreline; otherwise, the river was clear of ice. The water was remarkably clear after some of our cold weather.  Sometimes it was possible to look down into the water a couple of feet and see a thick carpet of leaves suspended over the bottom for 18 inches or so.  These carpets of leaves reminded me of clouds in the sky. 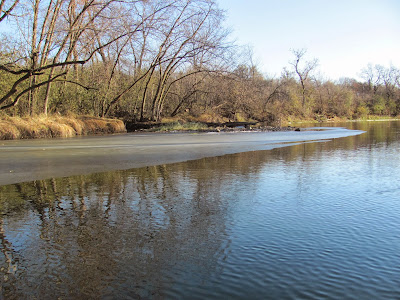 The current was surprisingly fast as we powered our way upstream.  Depth of the water within the channel was probably three or four feet, but the river is about 50 feet wide at this point, and there are gravel bars or mud banks along the way.  We touched bottom a couple of times in Dave’s 17 foot canoe, but did not grind to a halt until we reached the gravel bars that form just past the rapids under the bike trail bridge. 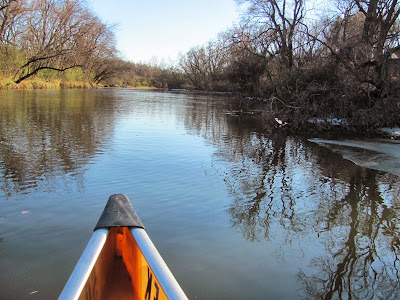 Taking a trip down the river at this time of the year is sort of a farewell to the paddling season.  The monochromatic brown tones of the vegetation going dormant is the major feature of the landscape.  Passing along the shoreline, the view into the trees is markedly different than just a few weeks ago when the undergrowth was thick and the world seemed green. 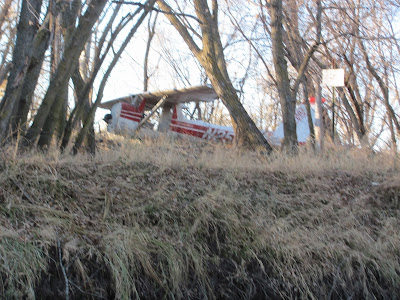 As we muscled our way upstream against a fairly strong current, we could look into the deserted YMCA camp along the right bank.  I thought of all the years that my own boys attended Camp Leif Ericson and had such a great time.  Along the left side of the river, the bike trail snakes its way northwest, and we could see riders enjoying the 57 degree sunny day. 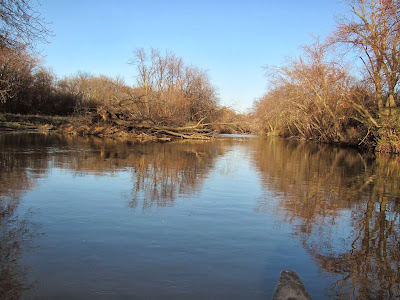 There were a few ducks still on the river enjoying their final days on an ice-free Big Sioux River.  I wondered where the ducks go for the winter, and Dave Finck thought that they headed for the Missouri River where the water is at least partially open most of the year. 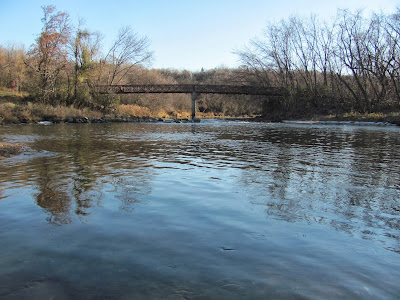 We made it up to the rapids and ground to a halt on a gravel bar.  After turning the canoe around, we made a very leisurely return trip back to the put-in at 26th Street.  Paddling was hardly necessary, just an occasional stroke to steer the boat; otherwise, the return was mostly a float trip down a quiet river with plenty of opportunity to look at the landscape, the water flow, and the trees that have fallen into the stream. 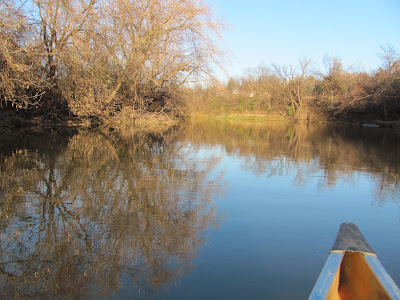 The cruise yesterday was really a moment to reflect upon the now closing paddling season.  The forecast ahead is for colder days, and I expect to see ice on the river soon.  As we found at Fensterman, the lakes are either closed down or just on the edge of being frozen for the next few months. 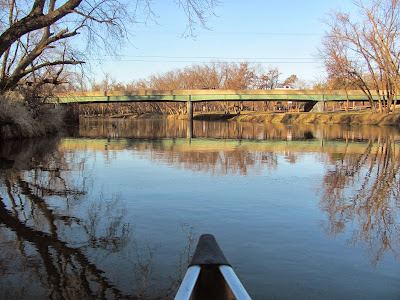 Very soon, I will clean up my kayak, remove the rack from the roof of my Honda Civic, and unload all my paddling gear from the trunk and carry it up into the attic above the garage.  It will be late March or early April before there is much chance of getting on the water again here on the Northern Plains.
A full set of the photographs of the BSR cruise yesterday can be found on my Flickr page at the following URL: http://www.flickr.com/photos/jayheath/sets/72157637678498436/
Posted by Jay Heath at 4:54 PM