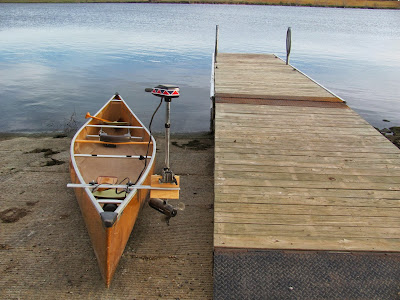 It has been a year since Dave Finck and I last visited Scott Lake, and this seemed like a good time to return.  I had some anxiety last night as I saw a forecast for winds of 25 mph and thought of waves cresting on the lake, so we made a fairly early start of it this morning and left Sioux Falls about 7:30 a.m. for an arrival time of 8:00 at the lake shore. The only hope for a good cruise on one of the area lakes facing that sort of forecast is to arrive early. 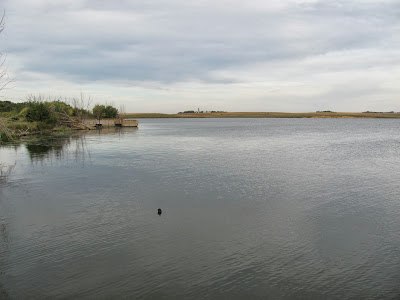 Scott Lake was known as Scott Slough until being reclassified at some point in the last several years.  The lake is just north of Hartford, SD, and is oriented roughly east and west.  The South Dakota Department of Game, Fish, and Parks has developed a good public access area with plenty of parking off a gravel road, a fishing pier, a launching ramp, and a vault toilet. It is a popular fishing spot for people in the Hartford area. 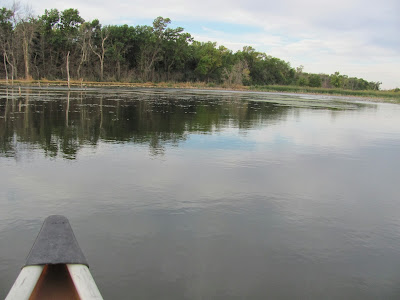 The lake is about .75 miles long and perhaps .25 miles wide.  There is a slough-like area on the southeastern side, just east of the public access area, with a lot of bird life, including great blue heron. 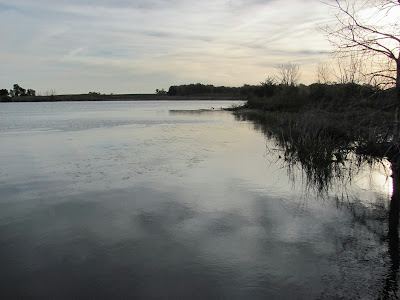 The wind was nearly 20 mph out of the south as we set out on the lake.  The south side of the lake is fairly sheltered with trees, so there was quite a variation in surface conditions on the water, ranging from nearly calm in the extreme lee of the shoreline to rolling waves out on the north side away from any sheltering landscape or trees. 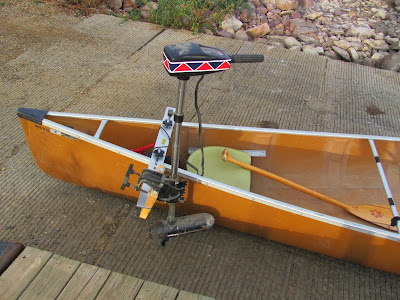 For a variation this time, we took one of Dave Finck’s canoes with a side-mounted electric outboard motor.  We thought that we would try “geezer canoeing” with the motor and just cruise along the shoreline.  As we cruised along within the lee shore, I felt like I was riding on a motorcycle rather than a canoe.  My seat was in the bow, so I was just holding on to the gunwales with my hands and keeping my knees on the side of the canoe. 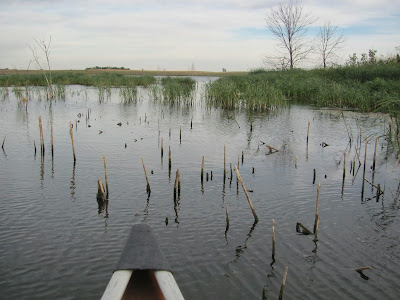 As we did last time, we started out from the ramp and turned east, entering into the slough to cruise among tree and weed stumps and very calm water. There is a beauty to this sort of waterway with the underwater growth clearly visible, the bird life around the shoreline, and the tree cover. 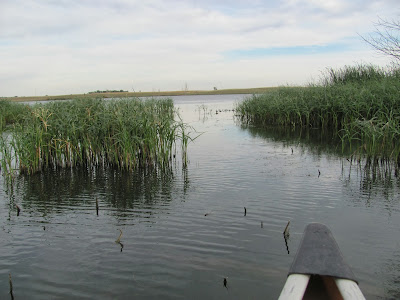 We entered the slough on the eastern end and paddled through this calm backwater to a grass-clogged slot back into the main body of the lake. 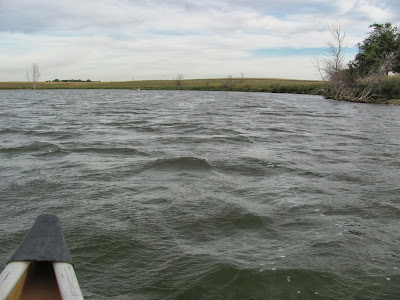 Heading back across to the northern side, we encountered rolling waves.  Dave Finck engaged the electric motor, and we cruised silently along the northern shore. 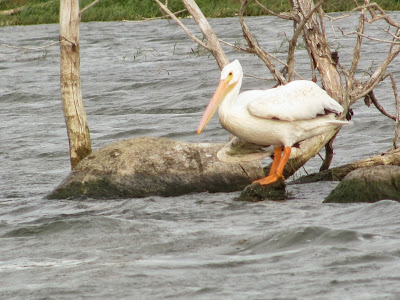 As we moved along, we came across a lone pelican on the water that did not fly away upon our approach.  Instead, the pelican remained nearly in place.  As we got closer, the great bird flapped off a few feet but did not fly.  It seemed that an injury prevented flight, and I wondered about its fate as the season deepens into winter. 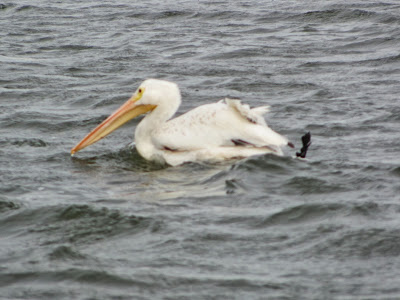 As we watched the pelican, we suddenly found ourselves “high-topped” on a large rock just below the surface in water a few feet deep. This is a situation that can easily result in a capsize, especially in a large flat-bottomed canoe.  Fortunately, we were able to inch the canoe off the rock and continue into the waves. 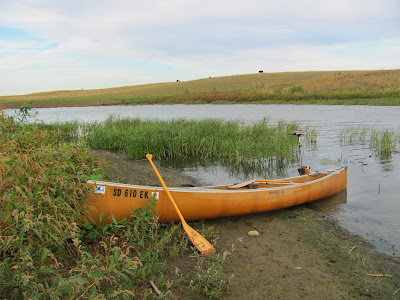 There is an island in the western end of the lake, and we landed the canoe for a stroll along part of the shoreline.  Last year, we were able to walk around the island, but this year there was more water in the lake and more growth along the shore of the island. 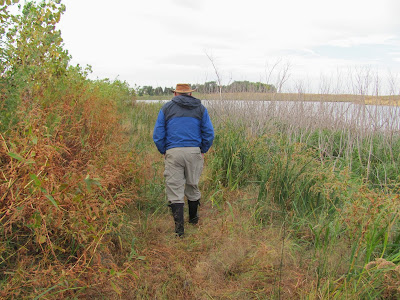 Still, we did move about the shore and observed the tracks of birds and small animals, probably raccoons. 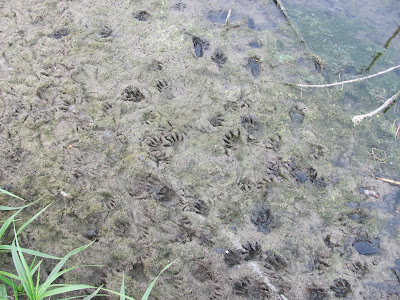 Fighting the wind, we made our way back to the southern shore and coasted along in the lee toward the public access area. 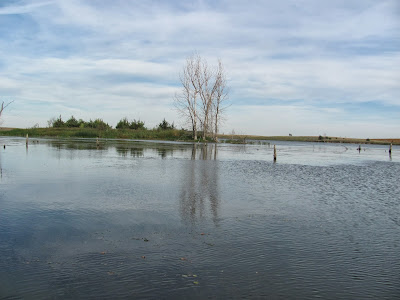 The wind today sometimes was just too much for even the electric motor on the canoe.  When broadside to the wind while crossing from north to south, we had to use paddles as well as the motor to keep from being blown into the rocks or the shore.  Finally, we decided to just rely on our paddling rather than fiddle with the electric motor. 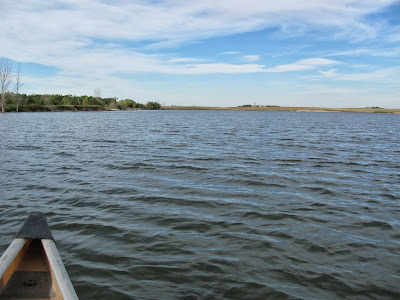 Since the lake is rather small, we decided to return to the slough to check it out in more detail and then to go over the northeastern shore.  From there, we returned to the launching pad in the public access area and wrapped up the cruise.  Our time on the water this morning was just over an hour and a half. 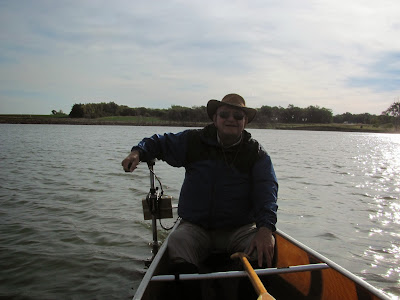 I had been interested in the notion of motor-canoeing, and this experience with an electric motor was something that had appealed to me for some years. I don’t know that I would want to do a lot of motor-canoeing.  Dave told me that you have to be in calm conditions in order to enjoy the sensation.  As I think about it, I guess that physical exercise is one of my motivations for paddling; I suppose that motor-canoeing is sort of like sailing my kayak, a change of pace, something to add a new twist to cruising. 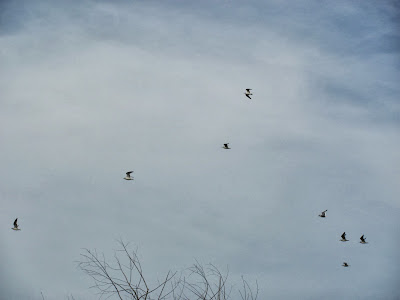 For the complete set of photos of this cruise, please refer to my Flickr Account at the following URL: http://www.flickr.com/photos/jayheath/sets/72157635808287423/