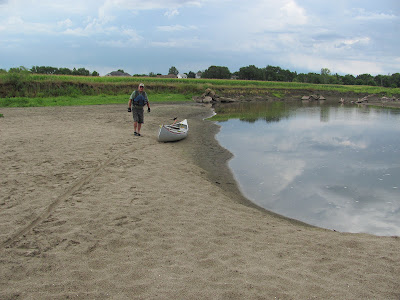 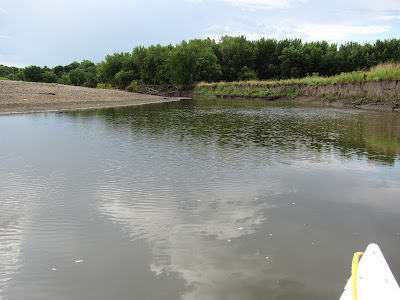 So, with the drought, I wondered what the river would look like as it moves south past Sioux Falls.  David Finck and I decided to take a short cruise on the Big Sioux River in what might be called the Brandon-to-Brandon stretch.  There is a public access area onto the river just off Rice Street, on the edge of Brandon, and the next “take-out” is at the Big Sioux Recreation Area, about 3.25 miles downstream.  This seemed like an ideal route to “test the waters.” 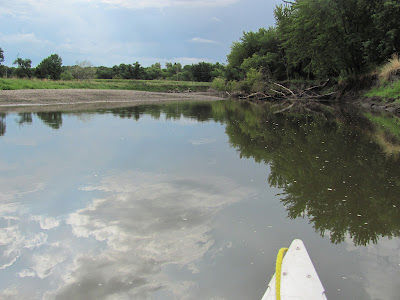 Today began with dark clouds and a teasingly short thunderstorm and rain.  By 9:30 a.m., the dark clouds had largely passed, and Dave and I met at the “put-in” off Rice Street in Brandon.  We shuttled his van and trailer down to the Recreation Area and came back in my Honda Civic.  We shoved off into the river about 10:00 a.m. or so. 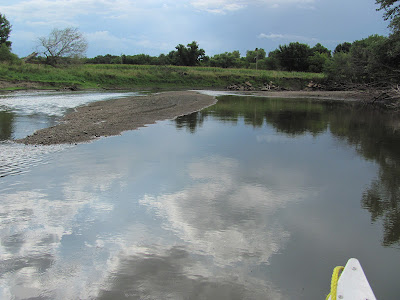 The river has receded to a channel with wide sand bands and brush and tree remnants of past floods further narrowing the flow. 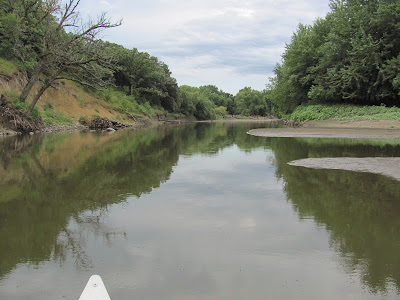 We decided to use an aluminum canoe of Dave’s for the cruise because of the anticipated shallows and the need to exit and reenter the boat multiple times.  We were surprised to find that this was not to be the case.  The river depth varied from four or five feet to only a few inches, but we were able to stay in the deeper channel most of the time.  We had to get out once to drag off a shallow sandbar and again to bypass a strainer that clogged the stream; generally, though, we were able to move smoothly down the river. 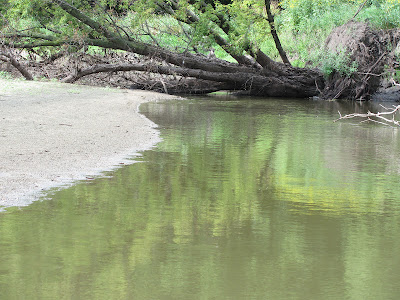 The landscape of the river is quite changed with the low water levels.  The normal water depth is a few feet higher than it is currently, and the driftwood and banks have taken on a definition that passes unnoticed during times of a swifter passage through a wider and deeper flow. 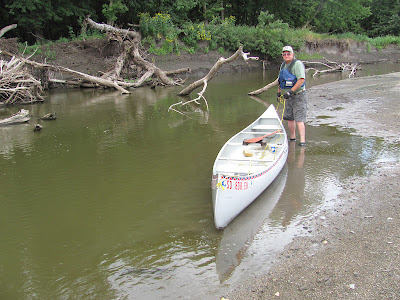 There were lots of birds visible as we cruised along, but they often flew off before I could fumble my camera out of its case.  We saw a large owl, a couple of great blue heron, and an America Bittern – at last a bird that stayed with us long enough for a photo. 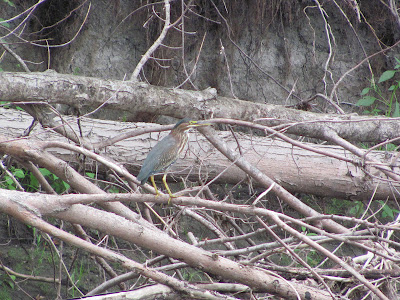 The cruise was pleasant, a tranquil trip down the river in conditions that made such travel seem doubtful.  It was really a wonderful way to spend perhaps an hour and a-half moving along through interesting landscape. 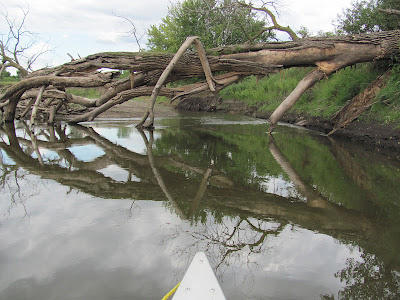 Dave expressed the thought that perhaps kayaks would have not moved so easily down the river.  The canoe draws less water, and it is easier to get in and out of the craft while still on the water.  We lined the canoe through one set of strainers, exited the canoe twice, and once I got out and pulled it over a sandbar.  Getting in and out of canoes is an easier process to negotiate than in kayaks. 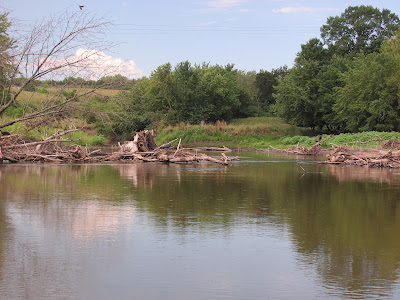 All too soon, we passed under the footbridge linking the two sides of the Big Sioux Recreation Area, and then came to the “take-out” just before the gravel road marking the end of the park. 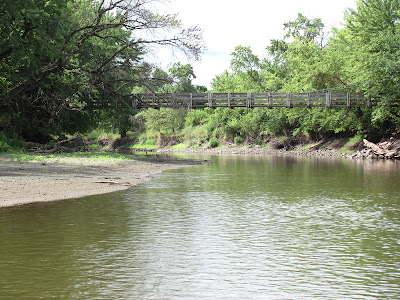 So, under the current dry conditions, it is still possible to travel down the Big Sioux River, at least on this “Brandon-to-Brandon” 3.25-mile section.  It was a great trip! 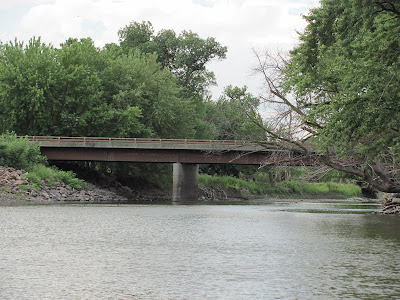 Do you use a DSLR when canoeing? I want to bring my camera when canoeing but am terrified of it dropping into the lake!

No, Christine, I do not have a DSLR; my camera is only a Canon PowerShot SX120. At first, I would not take in out in a kayak with me, but then I finally decided to chance it and have been using it for several years. I do have a waterproof plastic case that I often carry with me, and if the conditions suggest any possibility of tipping over, I put it into the case and tie it into the boat. Once I did tip over on a trip, and the case saved the camera. Losing the camera is always a possibility, and that is why I use a less expensive one. It is really best to have one with an optical viewfinder, and the one I am currently using does not. I am in the market for something better, but I will resist a SLR for kayaking.

How long was the Brandon-to-Brandon trip in terms of time?

Our trip was about an hour and a-half. We did not stop along the way except the two times described. It was a steady but leisurely paddle in the canoe.

your bird pic may be a green heron.

Jay---I am setting about the task of painting a watercolor landscape for our auction at Beaver Valley Church this weekend. As I was looking for photos of the Brandon area, I came across the photos of your kayak trip. I particularly like your footbridge pic, and thought I would ask permission to use it as visual inspiration for my painting.