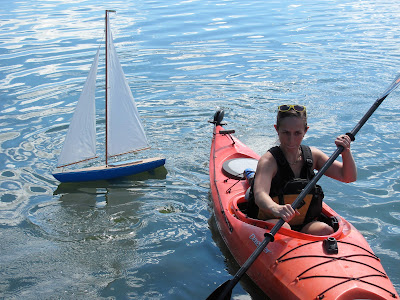 Quite a few years ago family college tuition expenses led me to sell my two canoes.  It was one of those tight financial times that many families experience, and the canoes just seemed like assets that could best be turned into cash. A couple of years later, after the crises had passed, I decided to buy myself a radio-controlled sail boat and slip back into a long-held fantasy of reinventing myself as a sea captain.  I thought that I could at least afford a model sailboat and escape into my fantasy on the waters of Covell Lake in Sioux Falls. 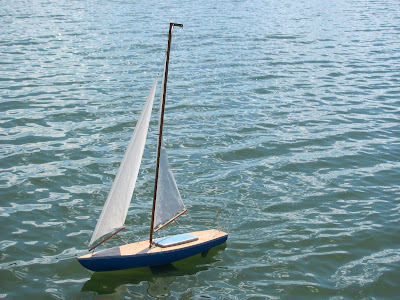 I named the boat the Ghost after the vessel in Jack London’s novel, The Sea Wolf.  The craft is a sloop-rigged 34” boat with a height from keel to masthead of about 52 inches.  There are servos that provide movement of the rudder and swing to the boom and jib from a remote controller with two channels: one for rudder movement, and the other for sail swing. 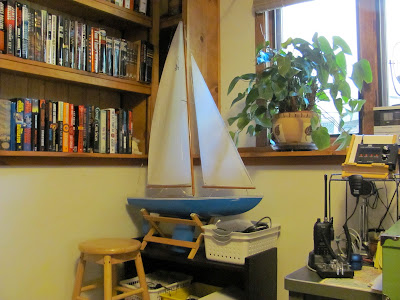 It had been six or seven years since I have sailed the Ghost; during that time, it has been resting in a cradle on a shelf in the lower level of our home.  Today, however, I took the Ghost, my regular kayak, and my Folbot out to Lake Alvin for a couple of hours with my son, Derek, and his girlfriend, Molly. 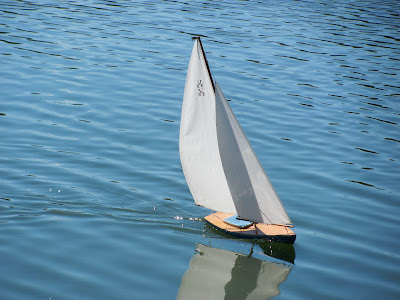 It was a glorious day, with clear skies, light winds, and a wonderfully cool temperature of about 60 degrees at 9:30 a.m.  This is the first cool day in several weeks of sweltering temperatures and long weeks with no rain. 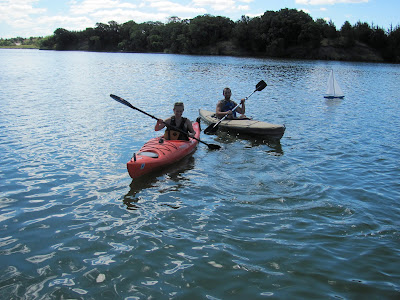 Getting the regular kayak ready for launch was a snap; assembling the Folbot was a bit of a challenge.  It has been in our storage shed and unused for over a year, and perhaps my skills at putting it together had faded some.  In the end, though, my son, Derek, and I got it all put together, and he and Molly took off in the kayaks to do a paddle around the circumference of the entire lake. 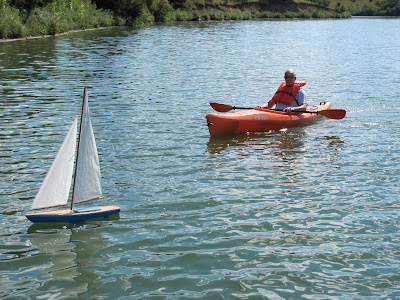 Lake Alvin seems to have become a favorite spot for area kayakers.  There were at least five parties of paddlers over the couple of hours we spent at the dock area of the recreation area. Zach, of Zach’s Canoes and Kayaks, was there with his trailer of boats to meet with some of his customers. 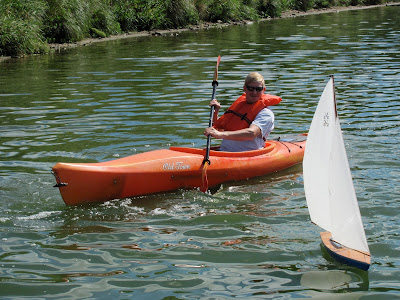 While Derek and Molly set out in the kayaks, I put fresh batteries in the Ghost and launched it from the dock.  It took off in the light wind as though no time at all has passed since it last cut through the waters of Covell Lake. 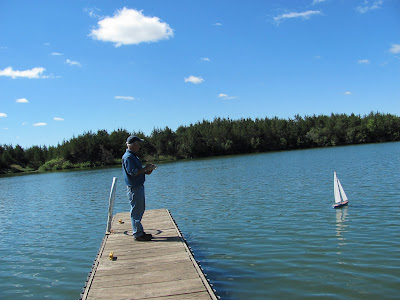 A couple of people were approaching the dock after a paddle in the northern section of the lake, and I sailed the Ghost over to greet them.  How often does a paddler run across an approaching model radio-controlled sailboat! 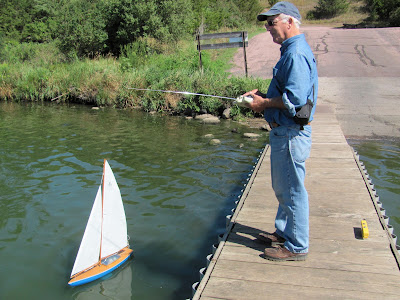 The boat sails just like a full-size sailboat.  It has a heavy keel and a covered deck; it has a rudder, and the sails are controlled by lines that run into the hull and are attached to levers that pull or let out the sails. 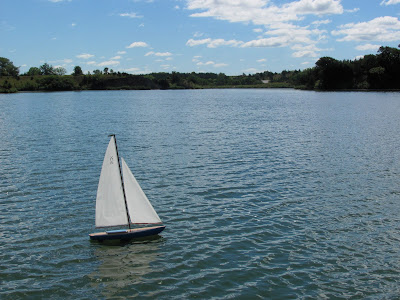 The boat cuts a nice wake through the water and responds quickly to rudder and sail changes.  In a stiff breeze, it heels over with the deck slanting down into the water.  The heavy keel, just like in a full-size boat, keeps it from broaching in the waves or wind.  Years ago, I took the precaution of placing four or five ping-pong balls beneath the deck to provide additional buoyancy in the event that the hatch slipped off on the deck. 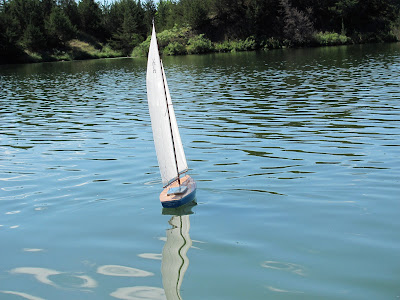 As time wore on, I became more reckless in sailing the boat closer to the bank, and on two occasions I ran it aground in the mud.  The boat draws more water than the kayaks!  Fortunately, both times there was a kayaker nearby who helped free the boat and nudge it out into deeper water. 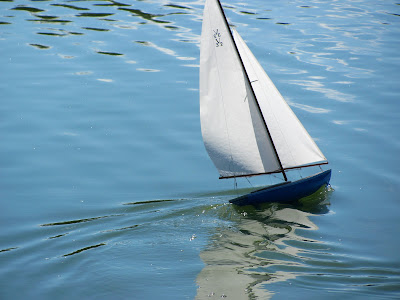 So, sailing the radio-controlled boat is not the same as kayaking, but it is a nice diversion, and it feeds a fantasy of heading out to sea in your own sailing craft. I think that the kayakers out on the lake today got a kick out of watching this little sailboat approach them and then scoot past on a nice gust of wind. 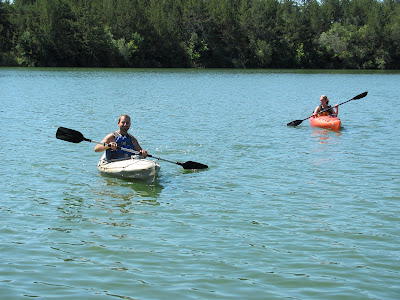 Now that I have bought new batteries and taken it out after so many years, I will get in a couple more sails yet this year. Lake Alvin is a good place to sail a model boat, but Covell Lake in Sioux Falls may be a safer bet, especially if there is no rescue craft available to lend a hand in the event of a grounding in the mud or on a rock.
Posted by Jay Heath at 5:15 PM

Jay. Your RC sail boat post struck a chord in me! I'm an avid reader of both the C.S. Forester "Hornblower" and Alexander Kent "Bolitho" nautical war novels set during the Age of Sail. I've always daydreamed of being a captain of a ship of the line, but need to settle as "captain" of a kayak instead! May you always experience a stiff breeze and calms waters Jay! :-)

Thanks, Mike. As you might imagine, I am also a Hornblower and Jack Aubrey fan, and generally a reader of nautical fiction. Sailing the Ghost does give me an opportunity to practice my nautical commands and to escape into an imagined alternative life at sea. Of course, I would much rather have a large sailboat that would be capable of casting off for distant waters. But, having a functioning model that works like the real thing has to serve for now. I also sail my kayak sometimes. Both a sailing kayak, especially using an umbrella sail, and an approaching radio-controlled sailboat create some interest on the lake.