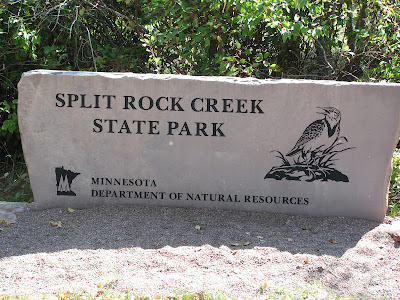 Its always good to discover a new body of water in your general area.  Recently, my paddling pal, Dave Finck, told me about how he has frequently paddled on Split Rock Lake, just north of Jasper, Minnesota. I did some research on the lake and found that is part of the familiar Split Rock Creek that originates further north and flows south through Garretson, Split Rock State Park (SD), Brandon, and into the Big Sioux River along Highway 42 near the Sioux Falls park setting at Arrowhead and the Arboretum. Split Rock Creek is a very familiar waterway, one that SDCKA members frequently kayak, especially in the Garretson area through the palisades and from Brandon to Highway 42.  I have traveled on this creek many times over the years, and narratives describing various sections are presented on the area waterways menu along the right side of this blog. 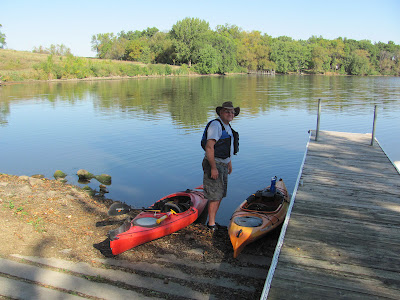 Split Rock Lake is 42 miles from my eastside home near 26th and Sycamore in Sioux Falls and only 22 miles north of Valley Springs, SD.  This morning, I drove to Valley Springs with my kayak atop the car and met Dave Finck at his home.  We loaded up the kayaks on his trailer and headed north on Minnesota State Highway 23 that took us just past Jasper to the very small town of Ihlen.  From there a sign directed us into Split Rock Creek State Park. 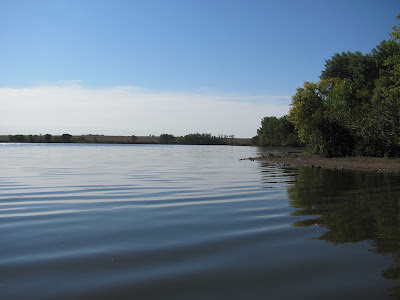 The park resulted from a WPA project begun in 1935 in which a dam was put across Split Rock Creek to create a recreation area.  Split Rock Lake is the centerpiece of this long narrow park of about 240 acres.  The park is exceptionally well situated for a variety of outdoor experiences.  The lake is long and narrow and is listed at 93 surface acres.  The park has an office, many well maintained camp sites, and a 2.5 mile hiking trail that follows a loop from the northern end of the park along the west side of the lake down to the spillwater and dam on the southern end.  The trail even follows a foot bridge over the spillway. 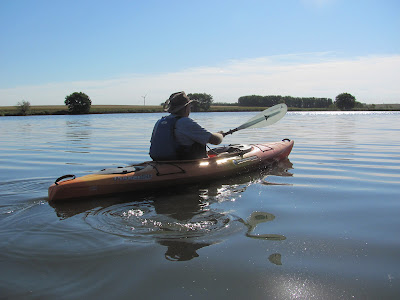 There is a deep channel that reaches up to 23 feet along the course of the creek bed that forms the center of the lake bottom.  The lake is oriented north and south. 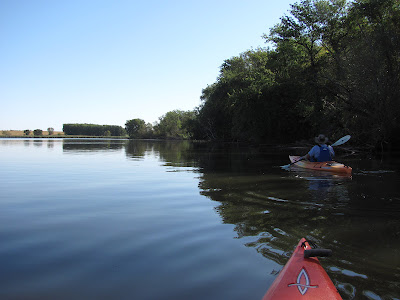 Split Rock Creek enters the lake from the northern end through a narrow channel flowing under a highway bridge and gains width as it continues for about 1.5 miles south to the spillway and dam. The creek continues its flow south from that point until it becomes the familiar Split Rock Creek that so many of us in the Sioux Falls area know well. 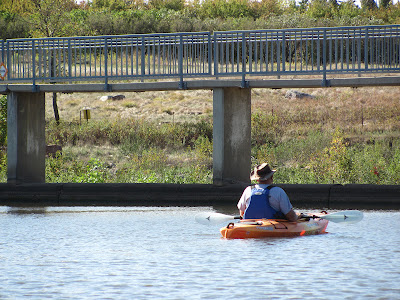 We entered the lake at a defined launching area about midway up the western side of the lake.  Right away, we turned and headed south toward the spillway along the wooded west side of the park, passing the camping, swimming, and picnic areas. 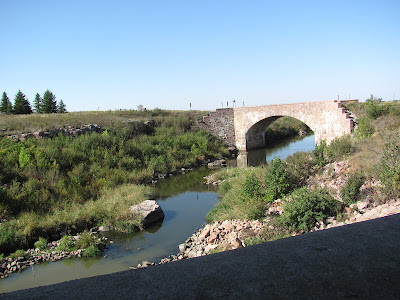 The lake seems to be about two feet lower in depth than normal, and we kayaked right up to the wall of the spillway and dam to take a peek downstream at an historic bridge and the flowing stream that would once again become the familiar Split Rock Creek. 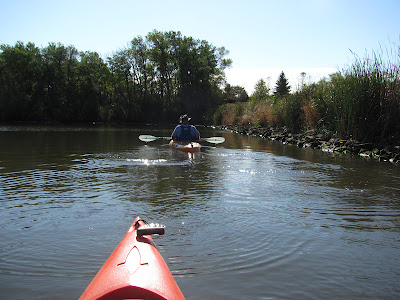 From there, we crossed over to the eastern side of the lake and entered a channel that took us up into the wetlands for about ½ a mile.  Split Rock Creek Park is situated between three Wildlife Management Areas (MWA) and seems an ideal place to observe wildlife.  Today, we ran across a few great blue heron, some hawks, lots of turtles, and several deer. 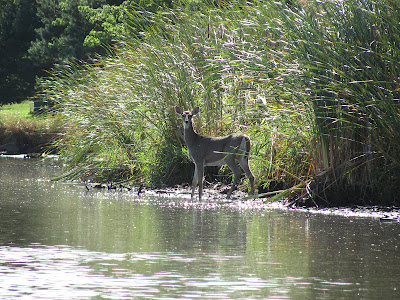 Exiting the channel, we continued north along the eastern side of the lake toward the mouth of Split Rock Creek.  The eastern side seemed to be shallower, although we had no trouble in navigating the route.  While the western and southern banks are largely wooded, the eastern bank is more often covered with tall grasses and reeds.
We continued north until leaving the main body of the lake and entered Split Rock Creek.  This waterway narrowed down to perhaps 30 feet or so as we moved upstream for about ¾ of a mile. 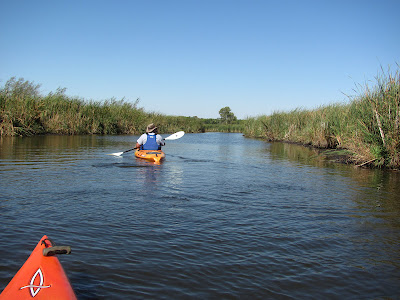 We passed through some rocks along the way that were just under the surface with the water depth at about 2.5 feet.  Both Dave and I found ourselves caught for a moment or two on these rocks before being able to push off. 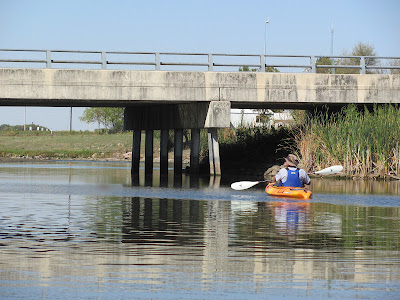 The route north passes under a bridge, but it comes to a quick halt at an electric fence just 50 feet or so past the bridge.  The parks department people have placed some markers on the fence to warn boaters; without that warning, it would be easy to get a jolt from the fence. 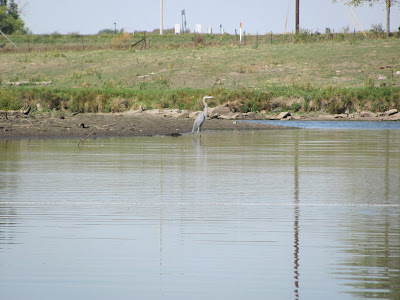 Retracing our steps, we returned south along the center of the lake, pausing a few moments to follow another lead into the wetlands along the eastern bank. 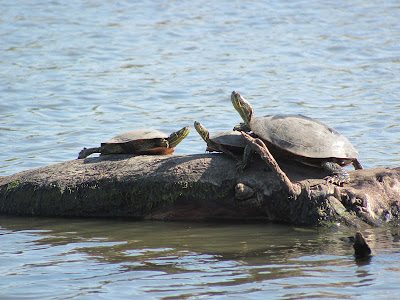 Our trip this morning was done under ideal weather conditions:  light winds at the start, a temperature of about 65 degrees, sunny skies, and no one else around or on the lake.  It was a great two hours of paddling in the best of circumstances. 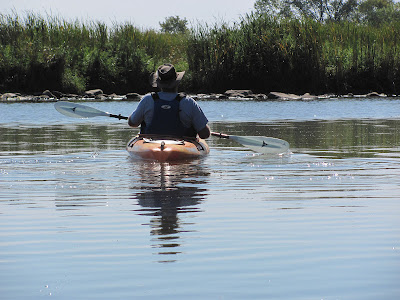 Split Rock Creek Park is a jewel in our area, and I am surprised that I didn’t know about it.  The parks people are friendly and helpful, the park is exceptionally well equipped and maintained, and it is a wonderful place to visit.  I especially like the 2.5 mile hiking trail that only adds another pleasant dimension to the park.  Canoes and kayaks are available for rent at the park for only $10 for four hours.  Park information can be found on their website  and by telephone at 507-348-7908. The daily fee to enter the park is $5.00.

Hey Jay. You will need to tell me how you were able to capture that great photo of the turtles sunning themselves on the rock! The turtles I encounter during my paddles are very elusive and will dive under the water long before I can get into effective camera range!