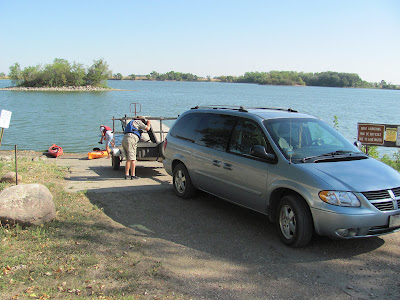 It has been six years since I last visited Swan Lake, located between Hurley and Viborg, SD, just to the west off State Highway 19.  The major access point to the lake can be reached by turning off Highway 19 at 288th  Street  and going west to 455th Avenue.  Signs at that point will provide direction into the lake community. 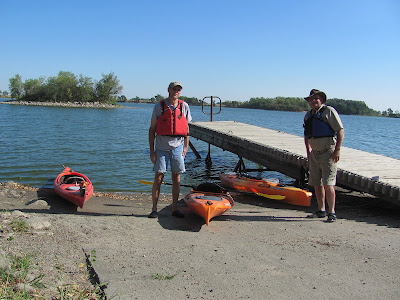 The put-in is a state provided access point within a developed area on the south shore of the lake.   This access point is very limited with sparse parking and no toilet. There is a shoreline road that continues around the eastern end of the lake and passes by another two public access areas, but these seemed to me to be largely provided for shoreline fishing. 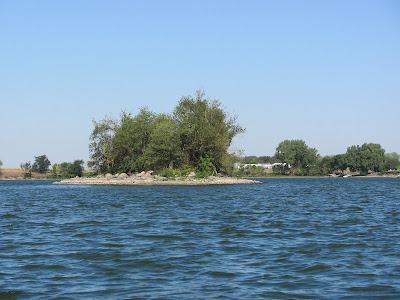 Dave Finck, one of my paddling pals, came by this morning at 9:00 a.m. with his trailer, and we loaded up my kayak alongside his.  Stopping to pick up Randy, we three headed to Swan Lake.  The lake site is not easily found without a detailed map, such as the South Dakota Atlas and Gazetteer.  Like many of us, we thought that we could easily locate the lake from our memory of past trips there, so we drove around in the general direction and missed the correct turn-off.  Recovering, though, we made it to the launching site and found that we were the only boats on the lake, as is typical on a weekday after school has begun.  In fact, we hardly even saw another person, even though there are cabins along some parts of the lake. 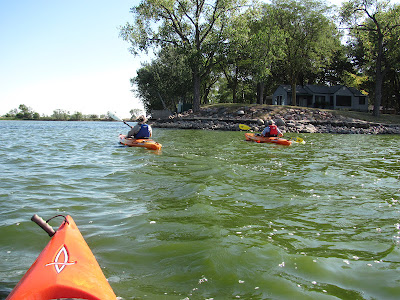 We set off heading over to the first of two islands in the lake, the smaller one just off the southern shore.  There was a light breeze over the water, the temperature was in the low 70s, and the sky was sunny: a nearly perfect day for a cruise. 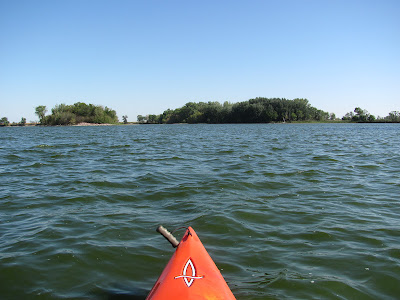 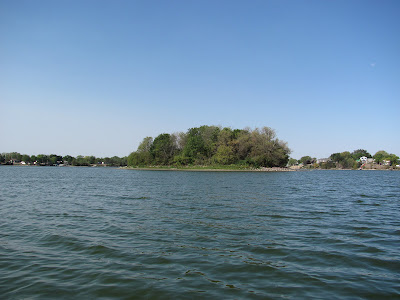 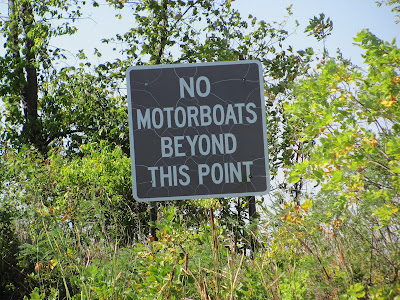 We saw a large great blue heron that kept leaping ahead of us, but always reappearing along our cruise. Otherwise, we saw only limited wildlife along the way. 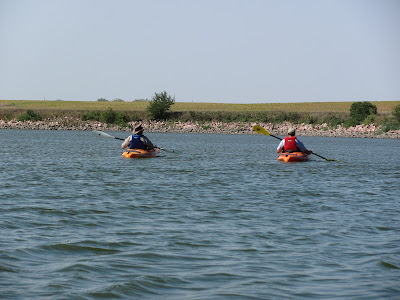 There was plenty of depth for our cruise.  Greater depth was found in the eastern portion of the lake, and depth gradually shelved in the western arm.  The lake seems two or three feet down from normal levels, although we had no problems with our kayaks as we paddled around the entire perimeter of the lake. 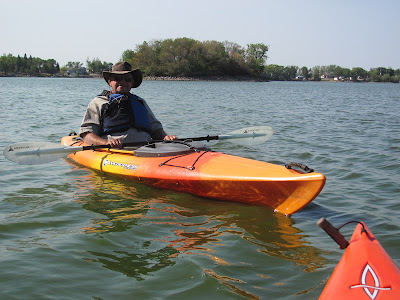 The lake is 208 acres in surface area, which is about twice the size of Lake Alvin.  The widest portion is in the eastern end and is about half a mile across at that point.  Swan Lake is generally oriented east and west, and the distance from those two ends is about one and a-half miles. 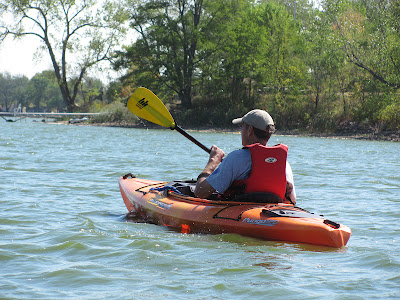 The wind came up out of the west as we were concluding our cruise, and we were riding a following sea on the return.  As we neared the end of our circuit, we decided to paddle around the smaller island off the south shoreline just to ride through the waves. 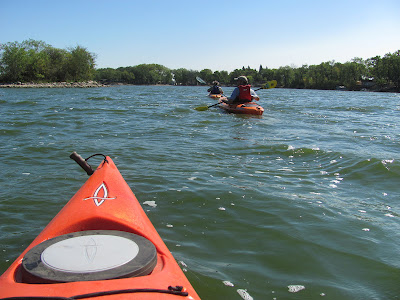 Our time on the water today was about an hour and a-half. It was a nice cruise over a varied landscape.  Swan Lake is about 45 minutes away from my eastside Sioux Falls home, and that puts it at the margin of what I consider a reasonable distance.  Again, my own rule of thumb is that I want to spend more time on the water than on the drive. 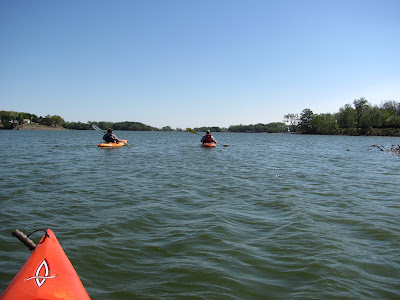 Interested readers can read my narrative from five years ago by accessing it on the menu of area waterways located on the right side of the blog page. In addition, the full set of photographs from the cruise today can be accessed on my Flick account at the following URL: http://www.flickr.com/photos/jayheath/sets/72157631426053798/ 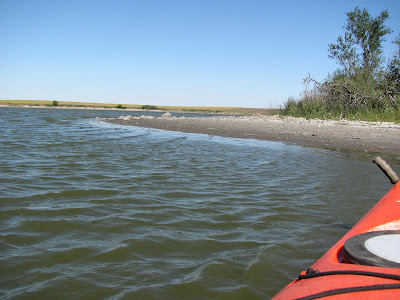 Hey Jay. Swan Lake looked and read like a great paddling adventure! Your paddles typify what my wife Rachel and I do during our kayaking outings. Several miles and a couple of hours in the kayak cockpit are usually enough for us! So, approximately how many paddling put in areas are within 45 minutes of your house?

Thanks for another comment, Mike. There are at least 19 paddling opportunities within 45 miles of Sioux Falls, including creeks, rivers, and lakes. In fact, there are a few more, but I just haven't yet visited them and written a narrative. I have a new location identified in Minnesota, just across the border from SD, and that is my next site to explore - probably next week. Most people, even those from the area, are surprised to learn about the many opportunities to get out on the water.