The following is a guest narrative from Patricia, a reader of this blog, who lives in Omaha and  paddles on the lakes of South Dakota.

I camped in the recreation area and was able to go paddling twice: Sunday evening and Monday morning.  Pease Creek is an inlet off Lake Francis Case, which is formed by the Missouri River behind the Fort Randall Dam.  There is a boat ramp that was used heavily by motorboats, but most must have headed out for the big water because I saw very few boats. 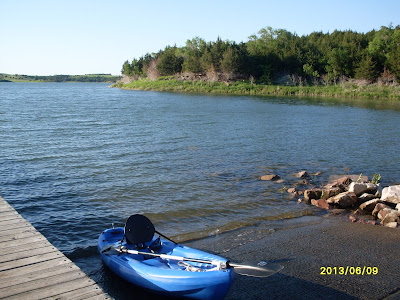 Sunday evening late I headed to the right from the ramp, following the east shoreline.  I heard lots of birds and crickets, but did not see many birds save for a bluejay and a goldfinch couple who followed me along the shore partway.  The most interesting sights for me were the fantastic figures formed by the bare dead trees and the interesting large rocks.  These last were both along the water's edge and in precarious positions in the tree roots. 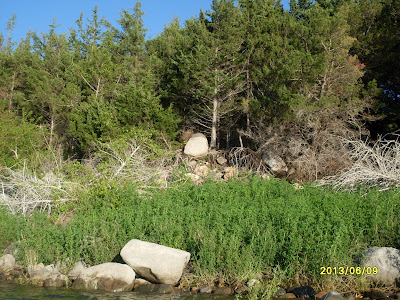 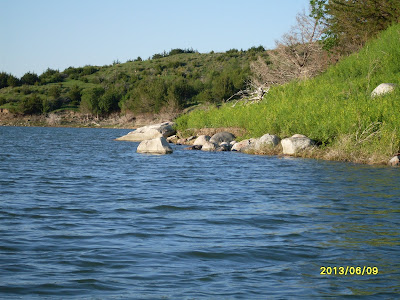 The inlet eventually narrowed and began to meander, making a big S curve.  I wanted to keep going but the sun was below the bluffs on the west shore, so I knew my time was growing short. I finally turned back reluctantly, promising myself I would come straight back here in the morning. 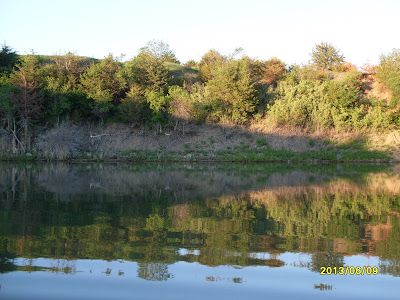 I had a surprise coming back: there was a small island in the inlet, to the west, that I missed on the way out.  It blended in so well with the bluff behind it on my left that I didn't see it, since the setting sun caused me to look mostly to the right on the way out. 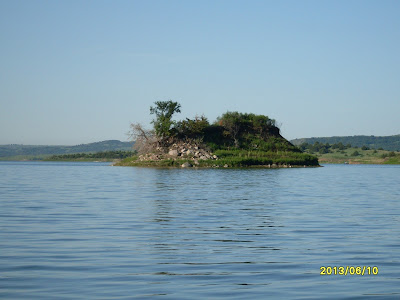 The last striking visual I had was the sun highlighting some tall bluffs where the inlet touches the lake. 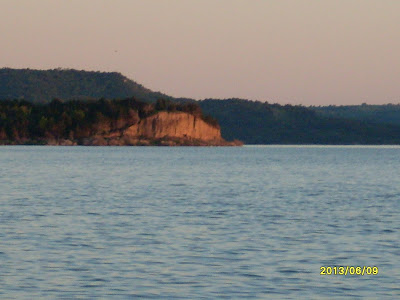 Fast forward to the next morning when I was on the water by 6:30 am (this doesn't always happen).  There was only one boat trailer in the parking lot then; when I returned about 9:30, the lot was full.  Instead of taking in the scenery this time, I made a beeline to last night's turn around.  It took me about forty minutes to get back to that point; it took me only another two minutes to reach the end of the open water.  I had quit one bend short of where the rocks made the creek impassable. 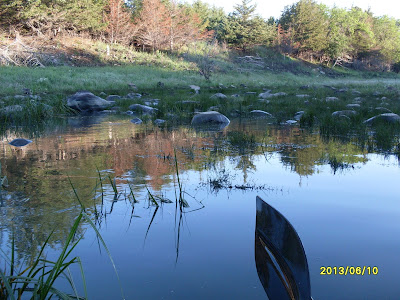 I then proceeded back, hugging the west shoreline this time.  It was not as wooded or rocky, and I saw more birds flying about.  The structure of the bluffs was visible and a lesson in geology and plant life. 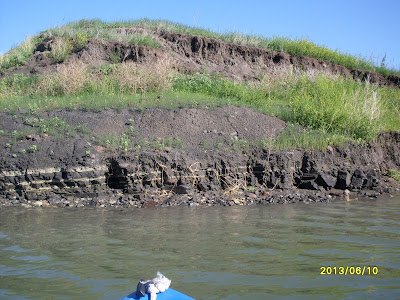 A solitary coot flew in and landed nearby, which I considered to be unusual behavior.  I usually see coots in large groups, and they are generally flying away from me.  My first thought was that Ernest Thompson Seton would have given this fellow a quaint descriptive name and written a story about how he came to be there by himself. 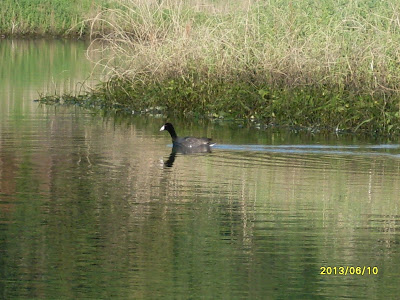 A large bay on the west had an interesting feature, tall dead trees with clumps of sticks lodged in their branches.  As I came closer, I noticed a heron perched on top and realized the sticks were probably nests.  I stopped approaching then, and backed up as quietly as I could because I didn't want to disturb any birds.  It was the closest I've ever gotten to a heron and very exciting. 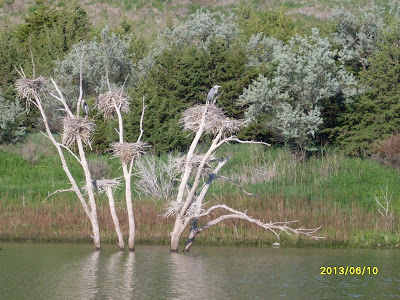 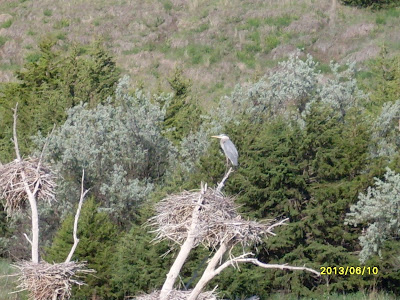 I finished up following the west shore and cut across the inlet to return to the boat ramp.  The breeze was just beginning to pick up along with the boat traffic (all very nice and friendly), so it was a good time to head back, pack up the tent and drive home.  Mapquest claims that Pease Creek Recreation Area is two and a half hours from Sioux Falls; I wish it were that close to Omaha.